Another Ultraman like Cosmos, Justice came to Earth at the end of the Scorpiss invasion. Attacking the invasion’s forerunner, Sandros, at the moment attacked Cosmos. The Ultra knocked the monster to the side. As it recovered, he delivered some of his energy to the weakened warrior, allowing them both to take on the vile monster. As they did so, Sandros began to unleash its black cloud, blocking out the sun. In complete darkness the pair of heroes was attacked mercilessly by its energized blades.

The foolish monster, however, eventually made a mistake. Charging up its fire ball exposed itself in the darkness, allowing both Cosmos and Justice to quickly fire off their Cosmium and Victorium Beams, annihilating the fiend and saving the Earth yet again. With their jobs done, Cosmos and Justice returned to the stars, but something horrible would soon drive them apart. Ultraman Cosmos 2: The Blue Planet

Aligning himself with a race of aliens intent on destroying all life on Earth before it could reach out and disrupt peace across the universe, the Ultra took on a female human form under the alias Julie. Justice arrived while Cosmos (Eclipse Mode) was in battle with two Gloker Pawns. It seemed he had come to help, but instead, recharged the robots with energy and helped vanquish the hero Ultraman Cosmos.

Julie watched as more attacks spread across the globe, not showing an ounce of remorse until discovering a little girl and her pet dog. This reminded her, and Justice, of the goodness within mankind. After the Gloker Rook devastated the Earth monsters that came to fight, Justice attacked it.

Breaking its armor repeatedly, the hero managed to finish it off with a blast of his Victorium Beam, but an even stronger opponent was coming in the form of the Gloker Bishop. The super being was unable to take down the super robot himself, but when Cosmos returned with a new form, the Future Mode, the two once again joined forces.

Being recharged by the hero, the two finished the weapon off with hits from both their attacks combined into one. The two Ultramen then flew into space, ready to defeat the rest of the fleet that were preparing to attack. Their beams had little effect against the Giga Endra and they were blasted back by its super strong beam attack.

They weren't ready to give up yet, however. They united into one super being, a giant of untold power and strength: Ultraman Legend. The powerful warrior of light held the destructive beam of energy and forced it back into the ship. The blast ripped the huge craft apart and an explosion larger than that of any other engulfed the superhero.

After Leugocyte's attack on Planet Kanon, Ultraman 80 gathered a strike force consisting of himself, Ultraman Neos and Ultraseven 21 to track down Leugocyte, fighting it on Planet Feed. Suddenly, Absolute Tartarus appeared with Reibatos, getting the latter to revive a Gymaira to interfere with the battle. The Ultra Heroes were in a tight spot until Ultraman Cosmos and Ultraman Justice arrived as backup after picking up unusual energy readings, having been sent by Delacion to investigate. The arrival of Cosmos and Justice gave 80 an opportunity to finish off Gymaira and return to helping the others fight Leugocyte. Tartarus himself then confronted the Ultras directly, but was driven off after Cosmos and Justice fused into Ultraman Legend, with a shot of the Fusion Ultra's Spark Legend being enough to convince the Absolutian to escape through a portal. After the battle was over, Cosmos informed the others that it was Tartarus who was responsible for the strange energy he and Justice had detected in this universe, as well as their home universe and the Future Earth World where Cosmos once helped Zero. Ultra Galaxy Fight: The Absolute Conspiracy

At some point after the incident, Justice was sent by Delacion to give a message to Queen Izana at the Galaxy Rescue Force that they would be allying with them and the Land of Light in the ongoing fight against Absolute Tartarus. While unsuccessful at delivering the message the first time, on another instance Justice did manage to tell Izana of their alliance, coincidentally at the same time as Seven 21 was their to send the same message on behalf of the Galactic Security Agency. With the two finally getting a chance to interact properly, 21 offered to spar with Justice for a while, with the both shown to be equally matched.

Ultraman Justice participated in the Dark Spark War but this time he fought not only alongside Ultraman Cosmos but, with other Ultras from other universes and their allies against the forces of evil. In the middle of battle, Dark Lugiel turned every Ultra present, alongside their allies, monsters and aliens into Spark Dolls. With the war over, an unknown warrior appeared and faced Dark Lugiel but like others he also turned into a Spark Doll. The location of Justice's Spark Doll is unknown.

Unlike other Ultras, Justice does not have the traditional rise scene like them. Instead, Julie puts her Just Lancer on her chest and she becomes a ball of light before flying up. Then it will reveal Julie in her Ultra Form as Justice Standard Mode. Her rise is similar to real time transformations.

Juile put the Just Lancer on her chest

Julie is enveloped by light

Juile becomes a ball of light before flying up

Justice's ball of light flying towards the battlefield

A silhouette of Justice appears and...

Crusher Mode (クラッシャーモード Kurasshā Mōdo) is Justice's second form, which grants him greater strength and firepower. Justice gains this form after realizing what true "justice" means, as he stands up and rebels against Delacion as well.

Ultraman Justice is one of the playable Ultras for this game. He can transform into Crusher Mode as well.

In Story Mode, Ultraman Justice will face Cosmos as seen in the third film. There are two different routes in the game: 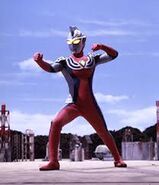 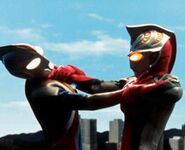 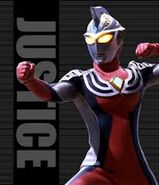