None, animated (The☆Ultraman)
Unknown (Ultraman: Great Monster Decisive Battle)
Ultraman Joneus (ウルトラマンジョーニアス Urutoraman Jōniasu) is the main Ultra featured in The☆Ultraman. Unlike the majority of other Showa Ultras, he hails from Planet U40.

A being from the Planet U40, Joneus was the strongest of the Great Eight, eight of the strongest warriors on his planet and wears the Star Symbol as his proof of the Great Eight. Joneus was assigned to Planet Earth long before the start of the series and witnessed the bravery of Choichiro Hikari defending his space station from a single Goglan trying to eat the station's wires despite his declining oxygen level. Combined with Hikari's selfless act of keeping it a secret, this convinced Joneus to mark the youth as his potential human host.

Joneus merged with Hikari during the youth's return to Earth after he was scouted to enlist in the Science Guard Party. Starting with their fight against four Seagras, Joneus assisted mankind in fending off against monsters and alien attacks brought to Earth. At one point, Joneus was killed by the Spirit Parasite, forcing both him and Hikari to be transported to Planet U40 for resurrection. Hikari met with his recuperating Ultra again, but in addition to revealing his true name, Joneus purposely obscured his appearance from his host. The two merged again and finally helped in repelling the Bader Group's invasion on both U40 and Earth. Both Joneus and Hikari were returned to the latter planet, but his human host was wiped of his memory to maintain U40's existence as a secret.

Several months later, Planet U40 was invaded by the Heller Empire, consisting of Heller and his other like-minded followers who announced their galactic conquest as a revenge for their banishment. As his other brethren were recuperating outside their home world, Joneus was left behind on Earth to protect it from Heller's forces. Both him and the Science Guard Party joined the U40 fleet to reclaim their home world and launch their attack on Heller City. Joneus at first parted ways with Hikari to fight against the aerial fleet, leaving the Science Guard Party to infiltrate the fortress until he merged with his host again to save them from Makdatar. With Heller's death, Joneus and the Science Guard were awarded for their bravery. Both him and his sister Amia stayed on Earth to observe its recovery from their war. Although the two parted ways months later, Joneus swore to return to Earth at the time of need, hinting that he might choose a different host by the time they reunited.

Like most of the other Ultras featured in the movie, he was only given a short bio featuring his ray the Planium Beam. However unlike the other Ultras, his fight scene is new live footage as he fought Bedran in a mossy forest. Ultraman Joe and Bedran were at a close match until Joe used his Planium Beam to eliminate the deadly beast. He is later shown as stock footage for most Ultra Brothers movies. Ultraman: Great Monster Decisive Battle

Ultraman Joneus appeared when Absolute Tartarus invaded Planet U40. As he and Tartarus fought, Joneus was declared a potential threat to the Absolutian's plans. They blasted at each other with energy bolts, and Tartarus fled the scene through his golden portal. Ultraman Zero then arrived and asked for Joneus' help in forming a team to face Tartarus. Having heard from Zoffy that U40 had been attacked, Ultraman Titas went back to his home planet to check on Joneus. Joneus reassured Titas that he was fine, and asked him to join the fight against Tartarus.

Soon after defeating Ultimate Shining Zero in Narak, Absolute Tartarus appeared, taking Yullian hostage and informing the heroes of his true motives before getting Belial and Tregear to fire their beams at them all. The group also received word from Ultraman Hikari that Genegarg had stolen a Z Riser and Ultra Medals from the Land of Light, causing Z to fly off in a hurry while Zero followed him. The Ultra League and the Tri-Squad prepare to recruit more heroes for the upcoming fight against The Kingdom. The Appearance

Joneus in his human host, Choichiro Hikari transforms into Ultra form using the same transformation device as the other Ultras of Planet U40. Choichiro removes the Beam Flasher from his belt, and then holds it to the sky where it seems to absorb energy, possibly from the sun. He then places the flasher on his forehead and transforms into Joneus. After the transformation is complete, Joneus grows in size. Starting from episode 20, later appearances had the transformation style added with the phrase "Ultra Change!" (ウルトラチェンジ! Urutora Chenji!).

Variant, Joneus is placed in the foreground instead 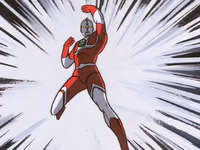 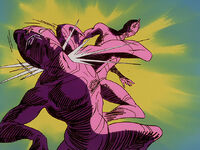 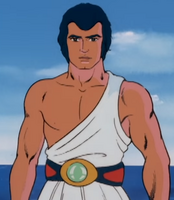