Residents of the Land of Light
Aquatic Homids

TBA
The Ultraman Story 0 manga version of Ultraman Jack. He is the first Ultra to go over his time limit and learn the consequences.

Like the other Ultras in their series Jack was once a humanoid being from the planet that would be called the Land of Light. When the Plasma Sun was activated Jack was transformed like the rest of his people and fought the various monsters that also appeared. He also witnessed the appearance of the Baltans' ships and the declaration towards galactic conquest. With the other Ultra Brothers he went out into space to assess the effects the Plasma Sun's light had on the universe and combat the monsters that appeared as a result.

One a distant planet, many years later, Jack fought in the ocean against three sea monsters simultaneously. Pressed for time, Jack forsook the advice of Father of Ultra who warned him about his Color Timer. Even though they are Ultras, they are not god-like. As a consequence, Jack, though defeating the monsters, had his transformation device shattered. He was rescued from drowning by a merman-like alien.

Prior to his battle with the sea monsters, Jack used a bracelet like Zoffy's to transform. It presumably worked in a similar fashion to his, an item bearing plasma ore. However after his transformation item's destruction, Jack's Plasma Ore became a part of him allowing him to transform at will the same way Hideki Go does in the TV series. 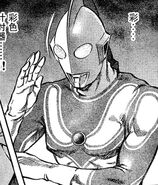