Revealed from the first ToyFair 1991 insert, a poseable & less muscular figure of Ultraman Great is intended to be produced by Dreamworks, but was canceled.

An 8-inch figure of Ultraman Great is produced by Dreamworks, and he sports articulation on the arms & head. He also comes with a Jack Shindo mini-figure, and a collectible sticker.

In Japan, Ultraman Great is released as an Ultra Hero Series figure. Like most Ultramen figures, he sports 3 points of articulation on the shoulders & waist, and he was primarily casted in red soft vinyl plastic, and unlike most of the Ultras, Great's silver paint operations is actually a mix between white & silver paints, mostly to evoke his spandex suit.

In 2000, Great was reissued with a new packaging, with some changes includes replacing the white-colored eyes with light yellow paint. He also comes with a collectible data card, and the picture depicts him fighting with Ryugulo. 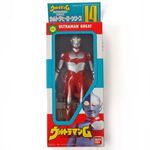 This release was discontinued and replaced by Ultraman Nexus Junis Blue in 2012, although he was still available in some department stores from Asia.

Add a photo to this gallery
Retrieved from "https://ultra.fandom.com/wiki/Ultraman_Great/Merchandise?oldid=425047"
Community content is available under CC-BY-SA unless otherwise noted.