The movie was screened at the SM Cinema in the Philippines on September 10-11, 2016. The movie was shown at the SM Family Movie Day where parents would take their kids to see the movie and they would get to meet Ultraman Ginga.

On December 5, 2016, William Winkler Productions Inc., announced that this film and Ultraman X The Movie: Here He Comes! Our Ultraman to be English Dubbed and played as a "Double Feature". The two movies were played at various conventions across the United States. William Winkler Productions stated that a dubbed version along with a subtitled version may potentially be released in the future.

Earth has regained peace, but is attacked by a new enemy with space-time powers. Musashi Haruno, Ultraman Cosmos' host, tells the UPG that the Ultra Warriors along with his Ultra, Ultraman Cosmos, has been imprisoned inside an evil fortress by a warrior woman named Arena and Etelgar, a powerful monster who has already defeated six others Ultras. The fate of many universes are at stake. 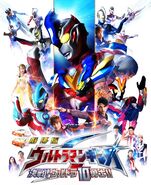 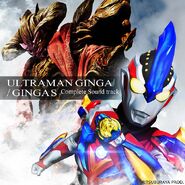 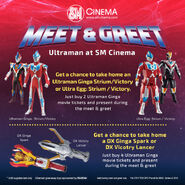