The Giant Artificial Brain Gillvalis is trying to eliminate all intellectual life forms throughout the universe. Ultraman Geed confronts the harsh fate against a mighty enemy who withstands the power of Ultra Warriors' light. Ultraman Orb, Jugglus Juggler, and Ultraman Zero rush to the crisis! And the heated feelings inside Riku awakens Geed's Ultimate form - Ultimate Final![2]

The movie begins with Airu Higa escaping her planet after her father’s death from a Galactron. Crash landing into an ancient Earth, Airu encountered Gukulushisa and asked for its help.

In the present day, Moa Aizaki and Zenna’s attempt to trail Jugglus Juggler’s crash landing spot, but ended up encountering Galactron MK2’s. The robot simply left after a brief scuffle with Ultraman Geed. Elsewhere, the Inter Galactic Defense Force members attempt to track Gillvalis’ Cyber Planet Kushia as Mother of Ultra sent the Silver Cross for a rescue operation. The Ultimate Force Zero had been fighting at least four of Gillvalis’ original Galactrons. After revealing himself, Juggler delivers his exposition to AIB and the Nebula House’s crews of Galactron MK2 and Gillvalis’ mission to find and destroy his sole weakness, the Giga Finalizer. The item is supposedly kept within the Side Space Earth’s Okinawa, while numerous Ultra Warriors, including Taro’s platoon of Inter Galactic Defense Force soldiers tried to attack Gillvalis. However, his core is indestructible, allowing him to escape with the entire planet.

Leaving Pega and Zenna in charge of the investigation, the rest of the party scouted a small town in Okinawa. They met Leito Igaguri during his business trip among the Eisa dancers as he introduced them to a tourist guide named Airu Higa. After a small tour, she gave them the sealed “red steel” (Giga Finalizer), but the item can only resonate with a chosen individual. All of the sudden, Galactron MK2 appeared from the sky and Gillvalis detected the red steel through its eyes. While the others took cover in the Neo Brittania, Airu summoned Gukulushisa from its statue and fought the giant robot before it teleported away.

Discovering each other’s identities as aliens, Airu revealed that she had been watching Riku Asakura from afar. Despite Gillvalis’ constant attempts in harassing others, his victims remain persistent. They created the Giga Battlenizer, and finally the Giga Finalizer through their effort. Unfortunately, even Riku is incapable of drawing the item’s potential. The party resumes their travel in a hidden alien street and entered MJ Galilee’s bar. As a result of an Alien Nackle’s harassment, Laiha Toba triggered a fight with the other bar patrons. Gai Kurenai walked in playing his Orbnica and helps the others by taking on the remaining aliens. The wanderer revealed that the reason for his arrival was to investigate the source of the Galactrons, including a particular model he fought before. The information broker is an Alien Jackie named Aron, who consistently required payments for each sentence before Laiha coerced him with her Jian. Noticing Riku’s troubles, Gai counseled the young boy of the responsibility as an Ultra Warrior.

Gillvalis brought the whole of Planet Kushia as part of resetting Earth through assimilation and launched Galactron MK2 as his first enforcer. Gai and Riku transform into Orb and Geed as they used several fusion forms at their disposal, but even with Ultraman Zero’s arrival, neither of them stood a chance. Geed’s impatience gets the worst of him as he marched forward with Royal Mega Master, but was digitized by Galactron MK2 before Orb’s rescued him using the Gomora Armor. The seeming destruction of the other two Ultras caused Geed Primitive to give in to his anger and killed Galactron MK2 in full power.

Airu healed Riku and comforts his guilt through her experience on Earth and the natives of Okinawa. Multitudes of Galactron descended from the sky to seize the Giga Finalizer while the Geed Riser is still on cooldown. Juggler decided to take matters into his own hands by using Airu’s pendant to enlarge his Majin form while the Valis Raider are on the loose. Orb appeared to rescue his rival as Zero possessed Leito to take down several henchmen, the latter revealed to have used Shining Star Drive to teleport themselves into the future and faked their deaths. Due to the technique taking a huge toll on his body, he was forced to rely on Leito once more and the two assume Zero Beyond to destroy a Galactron. Gukulushisa managed to defeat a Galactron, but was too late to save Airu from being the receiving end of the beam. As she passed on, Riku’s will unsealed the Giga Finalizer back to its true form and therefore was able to harness it as Ultraman Geed Ultimate Final. This form surpassed his original limits and drew his true potential to the maximum output. With all Galactrons vanquished, an exhausted Juggler returned to his human form, leaving the Ultras to storm Gillvalis in his planet.

In preparation for the fight, Gillvalis materialized a combat form with multitudes of cannons. Orb and Zero managed to destroy its body. With Airu’s spirit by his side, Riku used his final attack to destroy Gillvalis’ fleeing probe, therefore ending his reign of terror on Earth and outer space. The returned citizens and Gukulushisa celebrated this victory. Riku and Laiha met the Ultimate Force Zero for the first time. Jean-Bot senses a familiarity with Riku but dismissed it after his "Jean Fight" was deemed different.

As Gai and Juggler departed, Zenna paid his final respect to the now petrified Gukulushisa. Moa caught her partner’s attention by revealing Airu’s existence in one of the Pacific Records’ pages.

Residents of the Alien City

In addition to the Japanese DVD/Blu-Ray release, Mill Creek Entertainment also released the movie in the USA, bundled with the Ultraman Geed series as a single release.[3] They also launched a standalone release of the movie exclusive to select Walmart stores.[4][5] 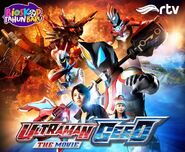