Ultraman Gaia is the 14th entry in the Ultraman Series

Ultraman Gaia (ウルトラマンガイア Urutoraman Gaia) is a Japanese tokusatsu TV show and is the 14th show in the Ultraman Series. It was created by Chiaki J. Konaka and produced by Tsuburaya Productions and Mainichi Broadcasting System.

Gamu Takayama is a 20 year old member of an organization called Alchemy Stars. After a monster known as C.O.V. attacked the Earth, Gamu falls through a portal of light and meets the giant: Ultraman Gaia, who gives him his powers. Later, when Gaia was in trouble in episode three, another Ultraman, Ultraman Agul appeared. Can they save the Earth? Who is Agul, is he friend or foe? Later in the series it is seen that Agul, too, is a being of justice, but only protects the Earth, not humanity. The conflict between the two later leads to a duel, opening a wormhole that allows a giant beast to reach Earth. What will happen then?

Ultraman Gaia takes place in yet another universe, one that is totally different from the world of the Showa-era Ultras (Ultraman to Ultraman 80), as well as the world of Ultraman Tiga and Ultraman Dyna. In a departure from most of the other series, there are two Ultramen as the main characters. They have conflicting philosophies in regards to defending the Earth from a mysterious, malevolent and extremely intelligent cosmic entity.

The first half of the series explores the growing tension between them, and their eventual clash. The second half has them reconcile their differences so they can defeat their common enemy.

The show is also different from past Ultraman Series in that the support team, XIG, has more personnel than the defense teams in previous series.

In this series, Ultraman Gaia is the lead, but Ultraman Agul makes many appearances. They are often at odds with each other in the beginning of the series. Gamu Takayama, the human host of Ultraman Gaia, believes that Gaia is here to save Earth and humanity. On the other hand, Hiroya Fujimiya, the human host of Ultraman Agul, believes Agul to be Earth's natural defense mechanism. He is at first more interested in protecting just the planet itself, even at the expense of humanity (hence the occasional clashes with Gaia). But this was discontinued after Gaia and Agul would work together as one to face more powerful monsters. 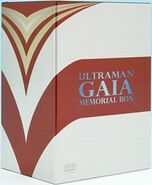