CERO A (All ages)

The game was released to coincide with the release of the film, Ultraman Mebius & the Ultra Brothers. Both the movie and the game were created to commemorate the 40th anniversary of Ultraman.

The game also features unlockable spirits in the form of manga versions of the Ultra Brothers from Ultraman STORY 0. The game itself being named "0" and the presence of Story 0 characters may be the result of also commemorating the manga.

This game is also featured with a new spirit system. The spirit can be unlocked by buying it in the Extras Mode or unlocking during the fights in Story Mode. To use the spirits is by pressing R button.

Every member of Ultra Brothers has their own STORY 0 version of spirit in this game with the exception of Father of Ultra, Mother of Ultra, Astra, Ultraman King, Ultraman Mebius and Seven's Superior. STORY 0 spirits have enhanced effect but only last a short duration and causes the user take more damage.

In this mode, the player chooses any Ultraman of his/her choice and they follow their own story. All Ultramen except Leo and Mebius have an alternate time mode along with their story mode.

Vs CPU: The player can select Ultramen or Monsters to fight each other.

Vs Human: Same as the above but done with other players.

The "Survival" Mode to the game. By fighting an endless amount of monsters with any character that the player chooses, points can be earned that can be used to purchase extra features for the game's gallery.

In this mode, the player can learn or train with the game's basics.

The gallery mode where the player can view prizes that he/she has won by using the points that he/she earned in Battle Mode or Story Mode. If the player collects all 50 prizes, there will be 10 extra prizes

Players are able to change settings in this mode.

In this mode, the player has the same matches but some of them are different. There is the stage where he/she can battle Alien Babalou early and in the end, he/she will also have to to beat Possessed Zoffy controlled by Yapool. There are less battles in this mode but they are harder. 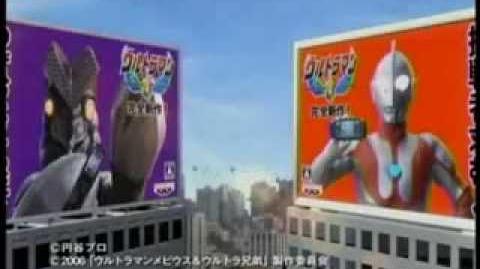 Banpresto released the game's trailer in 2006. 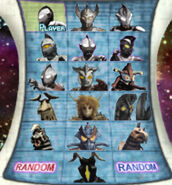