As the story moves forward, monsters from Heisei Era Ultraman Series started to appear. Fuji at the other hand, sensed something strange which was last felt during her kidnapping by Alien Mefilas. 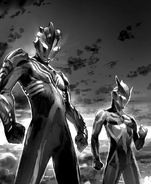