A new Ultraman born from genetic editing. Created from Ultraman Millennium's DNA, he inhabits the body of high-ranking military officer Ekin, who works with humanity's mysterious leaders to recapture Neil with the completion of Project Ultraman in mind.

Take note that Project Ultraman and the live shows follow different storylines and are separate continuities.

Due to the scarcity of resources available, inferences will be made from various sources to construct this section.[1][2][3]

Years after the Maryway incident which nearly brought humanity to extinction, a research facility, BASE 64, was set up in the Gobi Desert to house the top-secret project led by the world's current leaders, S. The motivation behind the project, known as Project Ultraman, was to extract Ultraman DNA from Millennium, who laid dormant in the desert, to ultimately elevate the elite to gods, caring not for the rest of humanity or the ramifications of such a venture. To that end, special children known as the Ultra Youth were brought in as research specimens, and the research eventually resulted in the birth of Elite, the first manmade Ultraman.

Ekin, a young officer from the Hong Kong military, would be sent to assist the Earth Defense Force in capturing Neil, the human host of Millennium, under the pretense of capturing a fugitive (likely after Neil had found out about their plans and escaped an uncertain fate). Granted the power of Ultraman Elite, he would fight against the alien monsters while chasing after Neil. Due to the instability of the Ultra DNA however, Elite's body would fail on him repeatedly, and would have killed Ekin if not for Millennium intervening in time.

Feeling indebted to Millennium, Elite would soon join forces with him after hearing about the reality of Project Ultraman, and they would later be accompanied by Dark Ultraman, who had turned over to the good side. Both Ekin and Nolan, once enemies of Neil, would rescue him from certain death after he was captured by S, and together they would fight against the alien monsters.

Born as the arbitrator of justice, Ultraman Elite was created from the fusion of the monster Elubo's microorganisms and soul energy, and the righteous and pure spirit of the Ultra Warriors and the audience (collected by the attack team), carrying with him Elubo's mission as the representative of Earth's lifeforms. However, disagreeing with Elubo's intent to wipe humanity off the face of the Earth, he instead aligned himself with the belief of coexistence, and teamed up with Millennium and Dark Ultraman to put an end to Elubo's antagonistic plans.

After convincing Elubo that humanity had changed their ways, he left for the Nebula M78 alongside the rest of the Ultra Brothers, watching over humanity as they rebuilt civilization whilst pursuing peaceful coexistence with other lifeforms on the planet.

Elite's human host Ekin/Elite was to be portrayed by famous actor and singer Ekin Cheng, whose transformation item was another Beta Capsule-like device, similar to Millennium's but with more intricate details. 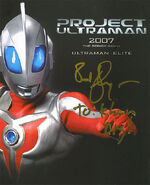 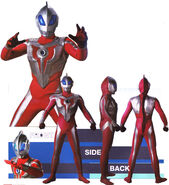