Originally a Resident of the Land of Light, and Taro's childhood friend, he became a wanderer, and was favored by the King of Planet Baltan because he helped the Prince of the Baltan, so Elf called himself King Baltan.

"I'll help the poor Baltans from the cold Ultras."

He devised the Earth Invasion Campaign and attempted to conquer the universe. He is reunited with Taro and was persuaded by him to turn back to good, but is seen as a traitor by the Baltans and held captive with Taro. In order to prevent the invasion of the universe and their plans to invade the Land of Light, he and Taro performs the Ultra Dynamite on the Baltan's power reactor/core computers. However, although Taro can be regenerated from self-destruction through training, Elf could not afford to learn the skills of physical regeneration, and therefore he died. 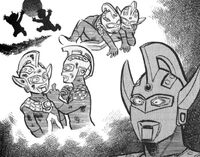 Add a photo to this gallery
Retrieved from "https://ultra.fandom.com/wiki/Ultraman_Elf?oldid=512160"
Community content is available under CC-BY-SA unless otherwise noted.