Hanejiro returned to Earth in the form of an yellow egg, which fell into the hands of the bumbling Alien Miji Trio. The three, despite being villains, were very protective of him and protected him from prying eyes until Hanejiro returned to Super GUTS. After Dyna was defeated by One-Z, Hanejiro helped to destroy the menace by dropping Pochi Garaon into the monster's brain case. Hanejiro was later taken away once again by the Alien Fabiras (off-screen).

The Return of Hanejiro is released on VHS, DVD, and Blu-rays, with an exception of the Memorial Box DVD Set. 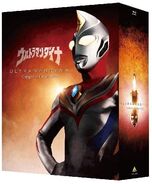