"We'll save it [the world] or die trying. It's why we were given a second chance."

None
Ultraman Chuck (ウルトラマンチャック Urutoraman Chakku) is the oldest and leading member of the Ultra Force, this Ultra Warrior, combined with stunt pilot Chuck Gavin after his arrival, caused a trio of pilots to crash. While Scott and Beth went to face Garuballade and Green Shocks, respectively, Chuck's first mission after his arrival on Earth was to save the non-malicious Sorkin Monster Zoon, and he later joined his comrades to bring down the strongest monster from Sorkin so far, the titanic King Myra.

All three Ultras were designed by Keita Amemiya, creator of the series Garo, who combined elements of previous Showa era Ultras. Ultraman Chuck is based on a combination of Zoffy and Ultraman King.

After the accident the Ultraman Chuck lay dormant within the body of the Gavin until the Ultra Force dealt with the Sorkin monster Zoon. After realizing that Zoon was harmless Gavin's plane was accidentally damaged by Zoon's wings. After failing to control the out of control plane, Gavin transformed into Ultraman Chuck for the first time. He then rescued Zoon from the National Guard sent the monster on a course to a suitable planet where Zoon could live out the rest of his days in peace. However, this act was looked on as treason by the guard and the heroes were attacked by long range missiles.

With the Ultra Force believed to be dead, it seemed as if nobody would arrive to help the battle against King Myron in New York. However, the three heroes did arrive. After the creature brought down the aircraft, the three Ultras confronted it. Despite their power, they were overpowered by the beast and defeated. With their energy draining fast, King Myra continued to rip New York City apart. The Ultra Force mother ship, however, would soon recharge the guardians with power. With newfound strength and a new plan, the three managed to drive the creature back. It tried to retreat, but was stopped by Ultrawoman Beth's Ultra Spout and then captured by Chuck’s energy bubble. It lashed out with its tentacles, but the three only used them as ropes to drag the raging creature along for the ride. Within minutes they arrived at their destination: the sun. The trio dumped the beast in the fiery source of life, eliminating it. More creatures, however, could pop up at any given time, and the three heroes were granted their wish to remain on Earth. Ultraman: The Adventure Begins

Chuck was one of the Ultra Warriors who fought against Ultraman Belial when he escaped his prison. Like many others, Chuck fell in battle and was frozen over along with the rest of the Land of Light when Belial took the Plasma Spark's core. Mega Monster Battle: Ultra Galaxy Legends The Movie

Chuck made a short appearance to grant Ultraman Zero energy so that he may fly out into the Multiverse to trace the Minus Energy trail that Belial left behind through his Darklops invasion. Ultraman Zero The Movie: Super Deciding Fight! The Belial Galactic Empire

Prior to the Ultraman Ginga TV series Ultraman Chuck participated in the Dark Spark War but this time he fought not only alongside with the Ultra Force, but with the other Ultras that came from other universes and their allies against forces of evil. While in their midst battle, Dark Lugiel appeared and turned every Ultra alongside their allies, monsters and aliens into Spark Dolls. With the war over, an unknown warrior appeared and faced Dark Lugiel but like others he to was turned into a Spark Dolls but his was kept within his device. It is unknown if Chuck's doll fell to Earth or is in Dark Lugiel's collection. Town of Falling Stars

Absolute Tartarus sent Absolute Titan to Planet Babel to confront Ultraman Noa after he had heard that Noa appeared there. Instead, Titan found himself ambushed by the three members of the Ultra Force, who were sent there by Zoffy who had somehow heard of the Absolutians' intentions with Noa. They fought against Titan until Ultraman Ribut arrived from the Galaxy Rescue Force, having been notified by Sora. The four Ultra fought Titan together until Noa's light appeared from the nearby ruins, manifesting as Ultraman Nexus, who proceeded to attack everyone else and open his Meta Field, which the Ultra Force escaped from.

They then fought against Tartarus and his minions when Titan retreated, being aided by the arrival of Seven, Leo, Astra, Joneus and Zero, who had managed to unleash his instincts to fight on par with Tartarus. With the additional reinforcements, the Ultras succeeded in driving Tartarus away. Ultra Galaxy Fight: The Destined Crossroad

Unlike most Ultras, Chuck transformed by will alone. At first he had to be in mortal danger but afterwards he could transform at will, as signified by a light in his eyes. 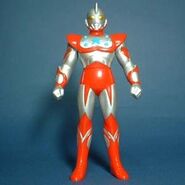