Ultraman Boy stars in this series where he learns about past Ultra Warriors, Kaiju, and defense teams, meeting and talking to various past Ultras about their experiences.

Ultraman Boy has three brief cameos in this movie. He is first seen fighting and losing to a rookie Ultrawoman while training in the Ultra Colosseum. Later, when Ultraman Belial invaded the Land of Light, Ultraman Boy witnessed Belial's attack, and tried to hide, shouting "Oh, this is terrible!" in fear. Afterwards, he was presumably frozen along with every other Ultra (excluding Ultraman, Ultraseven, Ultraman Mebius, Ultraman Leo, Astra, Ultraman King, and Ultraman Zero) when Ultraman Belial stole the Plasma Spark. During the film's resolution, he is seen standing between Ultraseven 21 and Ultraman Neos listening to Ultraman King's speech. Mega Monster Battle: Ultra Galaxy Legends The Movie

With the looming threat of The Kingdom becoming larger, Boy, alongside Ultraman Zearth and Ultraman Nice, trained at the Ultra Colosseum together. Nice and Zearth practiced but soon became agitated at each other after Zearth messed up their routine, to the point where they punched each other in the face. Ultrawoman Grigio came to heal the two before the three introduced themselves to Grigio.

Ultraman Boy reappeared in the puzzle role-playing game for mobile devices, Ultraman Galaxy. He is a C ranked card, which means he is quite common. 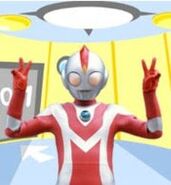