Ultraman Wiki
Register
Don't have an account?
Sign In
Advertisement
in: Ultras, Villains, Ultraman: Another Genesis,
and 2 more

TBA
The alternate counterpart of Ultraman Belial, known simply as Belial in this continuity. He is responsible for setting most of the events of Another Genesis into motion.

An ancient being, Belial was locked away like his original counterpart by King. However, unlike him, instead of being sealed in what would become the Kingdom of Light's moon, Belial was sealed in the core of the planet for what was intended to be an eternity. So secure was his prison that it was believed escape was in every sense impossible. However, something happened. Some unknown circumstance caused a fluctuation in the mechanisms of his perfect prison. That brief flux was enough to allow the evil giant to break free of his prison. Due to the nature of his prison, his escape caused the destruction of the Kingdom of Light, scattering its debris across the universe. In the chaos and destruction, Belial slipped away and disappeared to parts unknown.

Some time after his escape, and the destruction of the Kingdom of Light, the evil giant is suspected, with a shard of his former homeworld, to have encountered Mirror Master and had given him the shard he had taken thus giving Mirror Master his three-dimensional body. What happened to Belial afterwards and why and if he gave Mirror Master the shard is unknown.

It is now heavily hinted that Belial is in fact inhabiting Ultraman's body and controlling him for his own goals. What Belial plans to do with the shards is unknown but several Ultra have sought out the shards to rebuild their home world.

His current form is similar to his original counterpart's Reionics form only this one wears metal chains on his chest which was originally used to tie him up in the Kingdom of Light prison and didn't wield any weapon.

By possessing Ultraman, Belial sought to enter the Temple of King, where he had his host strike down Leo and remove the life sustaining shard from Blast. It is unknown how and when Belial assimilated with Ultraman but it is known that Ultraman went into seclusion when he first heard about the fate of his homeworld, due to depression. It seems that whenever Belial exerted too much control over his host, his features temporarily morphed to resemble his.

Belial upon freeing from his prison. 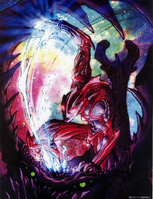 The first symptom of Belial possessed Ultraman can be seen on the changes of his color schemes.

The latest symptom of Belial possessed Ultraman can be seen on the changes of his body feature and his claws.