Ultraman Ace is the 5th entry in the Ultraman Series

Ultraman Ace (ウルトラマン Urutoraman Ēsu) is the 5th show in the Ultraman Series, and it contains 52 episodes. It was aired on the Tokyo Broadcasting System from April 7, 1972 to March 30, 1973.

Yapool an ancient interdimensional race of beings tries to conquer the Planet Earth with his army of monsters called Choju. The newest member of the Ultra Brothers, Ultraman Ace, arrives on Earth to aid humanity in the battle against Yapool. Touched by the sacrifices of Seiji Hokuto and Yuko Minami, he revives them and grants them the Ultra Rings, which allows them to transform into Ultraman Ace in times of need.

At this time, the Ultraman Series was facing direct competition from series such as Kamen Rider. This caused Ace to start shifting from a sci-fi/mystery adventure to full-tilt superhero fantasy fare. Also, all previous Ultraman like Ultraman, Ultraseven, Ultraman Jack (from Return of Ultraman) and also with Zoffy make more frequent appearances here, whereas they only made guest appearances in the previous show Return of Ultraman. In addition to this, the writing became darker, slightly less episodic, and far more intense, as Ace struggles against the forces of Yapool, the first big bad of the entire franchise. Civilian deaths are more frequent, and monsters are often killed in extremely gory ways, although there is not as much death as would come two years later, with the advent of Ultraman Leo.

Ace is also notable because it introduces the first female host to the franchise, Yuko Minami. Unfortunately, gender prejudice of the time caused backlash against Yuko, combined with the staff struggling to write plots incorporating both her and Hokuto with equal focus, forcing the producers to have her written out of the show. It also introduced the concept of recurring antagonists, with Yapool being the major villain.

A Malaysian DVD was released in 2014. It contains a Cantonese/Chinese dub, English subtitles, Chinese subtitles and Malay subtitles.

Mill Creek is also set to release the complete series on May 26, 2020, under the Steelbook and Blu-Ray releases. 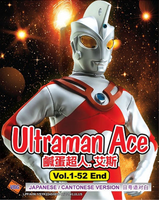 Mill Creek's Blu-Ray release
Add a photo to this gallery

Retrieved from "https://ultra.fandom.com/wiki/Ultraman_Ace_(series)?oldid=512220"
Community content is available under CC-BY-SA unless otherwise noted.