This may not be the article you are looking for. For other uses of the word, see Ace.

As a child, young Ace and his friend Rutia often went exploring around their homeworld. One day, they fell off the side of a cliff with Ace barely holding on to Rutia and the cliff face. It was a young Zoffy who came and saved the two, leaving the pair with respect for him and a scar on Zoffy's hand. As adults, Ace went on to train under Zoffy, learning to be a warrior under his tutelage. It was during a training exercise with Zoffy that Rutia and Ace were bathed in the light of the Plasma Sun.

After this, Ace eventually joined the coalition to defend space from the effects of the Plasma Sun, for its mutagenic light had spread across the cosmos. During a mission to find several missing Ultras, Ace came to a ruined planet. He was there searching for missing Ultras in response to an Ultra Sign but all he found were the ruins of a civilization. Coming across a technological tower Ace investigated and found strange experiments going on, monsters being fused to technological parts and other monster parts. He came to a wall holding various monsters and aliens merged with it and to his horror and disgust found the missing Ultras fixed to the wall as well. Ace went to look for answers and a possible way of freeing them unknowing setting of the tower's security system. Ace almost fell into a gravity well trap, making him relive he childhood experience of almost falling off a cliff. Ace escaped was about to fire his beam when the Remodeled Ultras awoke and attacked him. Ace fought them of without much effort but realized they would only attack if he did. Faced with no choice he fired his Metalium Beam, leaving himself open to four Spacium Beams to the back.

Ace blacked out, his mind focused on the memories of his time as Zoffy's pupil when he was with Rutia. It was just after a sparring match with Zoffy, Rutia was nursing his wounds when the two were enveloped by the Light of the Plasma Sun transforming them into Ultras. The dream/flashback ended with him being attacked by the four remodeled Ultras, with him waking up outside the destroyed tower. He was greeted by an unexpected presence his childhood friend: Rutia.

Like his TV counterpart, Ace uses the Ultra Rings to transform. However this incarnation was born with a human form like all Ultras in his continuity but still performs the same actions as Seiji to transform. 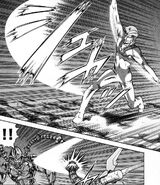 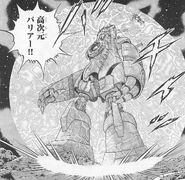 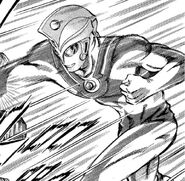