Ultraman 80 is the 9th entry in the Ultraman Series

Ultraman 80 (ウルトラマン Urutoraman Eiti) is the 9th entry in the Ultraman Series, airing from April 2nd, 1980, to March 25th, 1981, and returning the series to its original live-action format. It was produced by Tsuburaya Productions and aired on the Tokyo Broadcasting System channel. 80 introduced the second female Ultra, Yullian, as well as the first female human form of an Ultra since Ultraman Ace, excluding the Lady in Green. Unfortunately, its ratings were not steadily high, causing the Ultraman Series to go on hiatus in its native country for sixteen years, until the franchise's revival with Ultraman Tiga.

The ninth member of the Ultra Brothers, Ultraman 80 comes to earth under the guise of Takeshi Yamato. He becomes a schoolteacher, but in the first episode also becomes a member of UGM (Utility Government Members).

For the first thirteen episodes Takeshi must keep his identity secret from his students and balance life between his multiple commitments: defending the earth as a member of UGM and as an Ultra, and teaching students going through puberty.

This plot line, however, was dropped later in the series in favor of a more Ultraman-like story focusing on the defense team members exploring various monster-related mysteries. The school and (now grown) students, however, would make an appearance in episode 41 of Ultraman Mebius.

Later in the series Yullian, princess of Nebula M78, shows up to aid 80 in a few of his battles, culminating in a climactic battle against Plazma and Minazma. Shortly afterwards, one final Minus Energy monster appears, named Margodon. 80 and Yullian are prepared to fight it, but are found out by UGM, who insist that they should fight the monster alone. With Margodon defeated by the humans, 80 and Yullian depart for the Land of Light, confident that the planet is safe in the hands of humanity.

Ultraman 80 had average ratings due to tokusatsu not being popular during the time (in the 80's anime was having big fame due to the popularities of Mazinger, Getter Robo and Gundam franchises). 80 is considered among the least known of the Showa era Ultraman Series. In other countries, like France, due to the show being named Ultraman 80, in many promos 80 was named "Ultraman 2080". Tokuriders.com commented that the series are "a little conserved and a little new; it seems the creators had a drought of ideas, and had the imagination with the handbrake on, yet it has points of interest and valuable aspects...". The series currently has a 7.1 rating on the Internet Movie Database.

In 1987, William Winckler of Winckler Productions reveals that he had plans to localize the series with Adam West in a starring role.[1] While little is known about this adaptation, a pilot episode was made featuring a format comparable to the way the 1972 anime "Scientific Ninja Team Gatchaman" was adapted in the United States as "Battle of the Planets". The whereabouts of this pilot is unknown.

Ultraman 80 is available streaming with English subtitles on Crunchyroll. Ultraman 80 Complete DVD-Box features all episodes, and Ultraman 80 30th Anniversery Memorial Box I features episodes 1-28 and Box II features episodes 29-50. Malaysian DVDs where released by the DVD manufacturer Speedy/Aquos Sharp. Volumes 2-4 can be bought on eBay while vol. 1 has been seen but not seen for purchase. The DVDs contain english subtitles. TOKU premieres the series in the United States on March 27, 2017 and was finalized on April 28, 2017. [2] 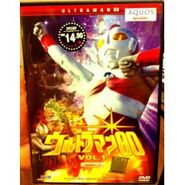