This may not be the page you are looking for. For other uses, see Ultraman 80.

Ultraman 80 (ウルトラマン Urutoraman Eiti) is the ninth Ultra Brother and also the last live action Ultraman from the Showa era. As his human form Takeshi Yamato, 80 was a teacher at the Sakura-ga-Oka Middle School. He was the Ultra that created the theory that monsters originated from minus energy, which is caused by the negative emotions of humans. Near the finale of his series, 80 was assisted by Princess Yullian before returning his homeworld alongside her after the final battle. 80 is a well known teacher from the Land of Light and was the last Ultra to protect Earth until Ultraman Mebius' arrival in 2006.

Ultraman 80's design was done by artist Osamu Yamaguchi. It was the opinion of director Koichi Takano that the classic Ultraman design was becoming too over-decorated with each new installment in the series, so 80 was designed to be much more simple while still following the image of the first Ultraman. Takano also attempted to make 80's mask appear more human, so more emphasis was put on 80's nose; red paint was also added to the crest to bring more attention to the nose. Red was also decided to be added to the arms and legs of 80 to bring out the "glove and boots" design that past Ultra Warriors possessed. So, red cuffs were added to 80's forearms and red lines were added to his shins in order to make the design look as faithful to the references as possible.

The modeling of the 80 costume was done by Hirakimai Productions. The edge of 80's eyes was raised in order to hide the suit actor’s peephole, and the mouth-breathing slit was molded into the top and bottom of the mouth. To hide the back zipper of the costume, which was normally hidden by the Ultra Warriors fin, a different approach was taken with 80, his full-head mask was made of FRP (Fiber-Reinforced Plastics) and was designed to open from the back of the head, leaving no back-pin zipper to hide.

In the design of the NG (Not-Good) suit, the nose of the mask was more square (the final design is more triangular), and the red region of the back was longer. The suit featured in "Ultraman Mebius", however, used the long red back design. In addition, the designer Yamaguchi tried to use ski wear for 80's suit, but the fabrics were more fragile and fell off the suit actor's body during practice shots, so they reverted back to the conventional wetsuit for the costume.[1] The miniatures of 80 in the rising pose for the transformation scenes were modified from the three-pronged model of Ultraman Taro in the same pose.[1]

Ultraman 80 came to Earth as one of the newest members of the Space Garrison (it is revealed in Ultraman Mebius that he was the ninth Ultra Brother), in the form of Takeshi Yamato. After a five/four-year hiatus since the departure of Ultraman Leo (1974-1975), monsters started reappearing again. Yamato's theory is that monsters are born of human wickedness, hatred, or sorrow. He decides to become a teacher at the Sakura-ga-Oka Middle School and served as a science teacher, as well as the homeroom teacher responsible for 1st Year E Division. He is absolutely dedicated to his students, for he is there to teach them not just about science, but also about life. Unfortunately, he has a penchant for being late, so he does things like promising his students to walk to class on his hands if he is late next time, or even promising to resign as a teacher. He even starts up a band with his students and jams on an electric guitar. His over-enthusiasm quickly wins the loyalty of his students, but often makes him an easy target for the Prime Deputy Schoolmaster Kumi Nozawa. Yamato loves rice omelettes and orange juice. He also loves Kyoko Aihara, the gym teacher, but loses all confidence in himself and sense of composure in her presence. Yamato dons an orange and silver suit to moonlight at UGM (Utility Government Members) after school and on Sundays. He gets the job from Captain Ohyama because they were both present at a park in the first episode, looking for signs of new monster activity. Ohyama is happy to meet someone who believes in the re-emergence of monsters.

However, even his own team members had their doubts, since none of them had any prior combat experience like their veteran captain. At school, only Principal Kennosuke Hayashi knows of Yamato's extracurricular activities. 80 has one of the more difficult human situations of any Ultraman. Ultraman 80 cannot be revealed to be known by humans since his revelation will lead 80 to leave Earth. Yet, Yamato must still balance UGM and school, all the while hiding his true identity while nursing a crush on Aihara. It is no wonder that he is often running to get to class on time. One has to wonder when he has time to grade papers. Though determined to teach his students about responsibility and integrity, he has to lie and break promises constantly to maintain these secret multiple personalities.

Ultraman 80 and Yullian returned home after the events of the final episode against monster Margodon. In the final episode, UGM destroys Margodon all by themselves. It is revealed that Captain Ohyama knows the real identities of Yamato and Hoshi, and a small celebration is held to appreciate Ultraman 80's and Yullian's assistance while on Earth.

Ultraman 80 appears in the second episode of Ultraman Graffiti: Wild! Ultra Country as a teacher at a school. In that episode, he gets hit by something that falls on him.

25 years later, Ultraman 80 comes to Earth persecuting Roberuga II. After a short battle, Ultraman 80 was taking too much damage from the monster. However, in a few moments Ultraman Mebius came and saved Ultraman 80, Ultraman 80 used his Ultra Lance Ray, stabbing the monster, and then 80 and Mebius each used their beams and destroyed the monster. His former students, which one works in the same school as a teacher, know that Yamato is, in fact, Ultraman 80. The students wanted to see him again. They decided to have one final reunion party at the school as the school is to be torn down, soon in the hopes that their mentor would come. Ultraman 80 tells Mebius that he will not attend as he feels that by joining the UGM to fight monsters he failed in his primary mission of teaching his students. As the reunion party starts on the roof of the school, Minus Energy emerges from the school to resurrect the monster Hoh, a monster Ultraman 80 fought before. Ultraman Mebius battles the monster who seemed to be sad somehow and this sadness was being reflected in the school building itself. Ultraman 80 then landed and told Mebius that since it was the negative energy that spawned the monster that he would defeat it. The monster willingly stood and seemed to smile as it dispersed after being hit with energy from 80's Buckle Beam. 80 then sees his student's delight at his appearance and hears them as they shout out how their lives have turned out thanks to him. Ultraman 80 then flies away and reverts to Takeshi Yamato and is joyfully greeted by his students at the final school reunion, as he realized that he hadn't failed them after all.

Ultraman 80 later appears in the final episode of Ultraman Mebius, where he along with the other brothers were destroying a rock made by Alien Empera that was coating the sun.

In the beginning, after Ultraman Mebius defeated the monster Bemular and returns to the Land of Light, it is revealed that a growth of Minus Energy is driving the monsters in space mad and that Ace, Jack and 80 were sent to investigate (the reason why the minus energy was growing was because Ultraman Belial was going to be freed soon, and would cause universal chaos). Moments later, after Ultraman Belial defeats all the Ultramen, Ultraman, Ultraseven and Zoffy, he went inside the tower containing the Plasma Spark. When he entered, Ultraman Jack, Ultraman Ace and Ultraman 80 warned Belial that to obtain the Plasma Spark he had to pass through them. Belial started attacking the Ultras, after sending Ace and Jack flying far, 80 started to attack him with a few energy beams. Belial started to fight against Ace again, after retreating a little, 80 came flying to attack him, but Belial hit him hard with his Giga Battle Nizer and 80 fell to the ground. Jack told 80 and Ace to use the Combined Ray against Belial, the three fired their beams and it combined into one, forming a strong beam, going straight at Belial, however, Belial used his Giga Battle Nizer to hold the attack, and he fired it back at them, exploding on them, and leaving them so hurt they couldn't move. They were beaten by Belial, and when Belial took away the Plasma Spark, the Land of Light froze, and Ultraman 80 was frozen as well. After Ultraman Zero recovered the Plasma Spark, the Land of Light was recovered, every Ultra was unfrozen and was brought back to life, with 80, Ace and Jack included, and all the Ultras went to listen to Ultraman King's speech in the end.

After Ultraman Zero and Ultraseven fought the Darklops Zero, one of them left a robotic piece. In a reunion of the Space Garrison, Ultraman 80 was able to feel the Minus Energy coming from the robotic piece, showing from where it came from, the Ultras come to a conclusion that the Darklops came from an alternate universe and therefore are unable to come together to stop them, but Ultraman Zero decided to go, so he can find his destiny. When Ultraman Zero left, all Ultras gave their light to him. Some time later, when the Land of Light was attacked by Belial's army, the Space Garrison went to fight the army of Belial, and they all succeeded in destroying the army thanks to Zero's efforts at destroying all of Belial's headquarters, and Belial himself.

Prior to Ultraman Ginga, Ultraman 80 participated in the Dark Spark War but this time he fought not only alongside with the Ultra Brothers but, with the other Ultras that came from other universe and their allies against Evil side. While in their midst battle, Dark Lugiel turned every Ultra alongside their allies, monsters and aliens into Spark Dolls. With the war over an unknown warrior appeared and faced Dark Lugiel but like others he also turned into Spark Dolls. The location of 80's doll is unknown but he likely returned to space following Dark Lugiel's defeat.

80 was among the Ultra Warriors who fought against Belial and his army during the Omega Armageddon, but was unable to stop Belial's army from ravaging the universe. 80 could only look on as Belial easily defeated Ultraman Zero, then succeeded in triggering the Crisis Impact before Ultraman King sacrificed his life to undo the damage caused by Belial.

Takeshi thrusts his fists left, then right, before holding the Bright Stick up in the air and shouts "Eighty!" as he presses the button, and then the item emits light that transforms Takeshi into Ultraman 80.

Travel Sphere
Add a photo to this gallery 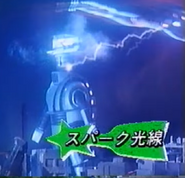 Shrinking Ray
Add a photo to this gallery

Ultra High Frequency
Add a photo to this gallery

Freezing Laser
Add a photo to this gallery

Ultra Kannon Ray
Add a photo to this gallery

Ultraman 80 appears in the video game Ultraman Fighting Evolution 3 as a new character. He has two episodes in Ultra Mode.

Yullian is 80's support character, however she is not playable and only mentioned in the story.

Retrieved from "https://ultra.fandom.com/wiki/Ultraman_80_(character)?oldid=439032"
Community content is available under CC-BY-SA unless otherwise noted.