Ultraman is the 2nd entry in the Ultra Series

Ultraman (ウルトラマン Urutoraman) is a Japanese Tokusatsu television series that first aired in 1966. The title card of the show was titled Ultraman: A Special-Effects Fantasy Series (ウルトラマン 空想特撮シリーズ Urutoraman: Kūsō Tokusatsu Shirīzu). Ultraman is a follow-up to the television series Ultra Q, though not technically a sequel or spin-off. The show was produced by the Tsuburaya Productions, and was broadcast on Tokyo Broadcasting System (TBS) from July 17, 1966 to April 9, 1967, with a total of 39 episodes (40, counting the pre-premiere special that aired on July 10, 1966).

Although Ultraman is the first series to feature an Ultra Crusader, it is actually the second show in the Ultra Series. Ultra Q was the first. In fact, Ultraman opens with the Ultra Q logo exploding into the Ultraman logo. Ultraman ultimately became a major pop culture phenomenon in Japan. The show's success spawned dozens of sequels, spin-offs, imitators, parodies and remakes.

To distinguish him from subsequent Ultra Warriors, Ultraman is referred to as the Original Ultraman (初代ウルトラマン Shodai Urutoraman), The First Ultraman, or Ultraman Hayata; this last is a reference to his host's surname.

This series is said to take place at some point in the 1990's; this was retconned once Return of Ultraman was released in 1971, placing the events of the series in the year of its production, 1966.

Ultraman's central characters were created by Eiji Tsuburaya from Tsuburaya Productions, a pioneer in special effects who was responsible for bringing Godzilla to life in 1954. The show's predecessor was a series called Ultra Q, a black and white series with 28 episodes very much like the original Outer Limits, although some compare it to today's The X-Files or The Twilight Zone.

The Ultraman project had the following working titles/plots:

The Ultraman series used various monster costumes, known as kaiju in Japan, prior to other series such as Kamen Rider and Himitsu Sentai Gorenger. The principals were played by famous monster suit actor Haruo Nakajima, who performed as the original Godzilla. Another Toho actor, Satoshi "Bin" Furuya, was sought out for the role of Ultraman, because of his tall stature and perfect proportions.Nakajima had an outdoor-sports and martial-arts background, and they decided that Ultraman would not seem alien if he was using earth-bound martial arts techniques. So Ultraman's fighting style was a mixture of grappling, Greco-Roman wrestling, and some Japanese martial arts, which evolved during the course of the series.Often costumes of famous monsters like Godzilla (as Jirass/Keyra in "The Mysterious Dinosaur Island") and Baragon would be recycled and altered, sometimes with nothing more than spray paint and often while the actor was still inside. Nakajima quipped once that the staggering gait of some of the monsters he portrayed was due less to his acting than to the fumes he had to endure.Some of the quadrupedal monster costumes could not be shown fully as his legs dragging on the ground would have been exposed, a necessary allowance to maintain balance in the often cumbersome outfits. Also, the expense of repairing the scale cities and landscapes used for battle scenes required economy of movement and meticulous planning. For more on the monsters, go here: List of Ultraman monsters

The storyline begins in the near future, as referenced from the mid-1960s (in episode 23, "My Home Is Earth", it is definitively established that the series takes place in the early 1990s, via a plaque shown at the end of the episode dated 1993) but it was later revised to take place in the 1960s. Sinister aliens and giant monsters constantly threaten civilization during this period. The only Earth organization equipped to handle these disasters is the Science Special Search-Party, or SSSP, a special worldwide police force equipped with high-tech weapons and vehicles, as well as extensive scientific and engineering facilities; this organization is called the Science Patrol, or the United Nations Scientific Investigation Agency, in the English-dubbed version syndicated in the United States.The branch of the Science Patrol that is focused on in the series is located in Tokyo, Japan. Led by Captain "Cap" Toshio Muramatsu (shortened to "Captain Mura" in the dubbed English-language version), the Science Patrol is always ready to protect the Earth from rampaging monsters, but sometimes it finds itself outclassed. When the situation becomes desperate, Shin Hayata, the Patrol's most capable member, holds the key to salvation in the form of a power-object and artifact called the "Beta Capsule", which, whenever activated, allows him to transform secretly into the super-humanoid-powered giant from space, who becomes known to the people of Earth as Ultraman. Ultraman remains until the threat is neutralized and then flies away to revert to Hayata. (This was shown, twice, by Ultraman firing a ring of energy from his hands that would fly to a safe location, and then energy from it would materialize Hayata even as Ultraman fades away at the same time). Ultraman's victory is never assured, however, as Ultraman's powers and, indeed, his very life force, come from rapidly depleted, stored solar energy.At the beginning of each transformation from Hayata to Ultraman, the "warning light" on the giant's chest begins as a steady blue color. Yet as Ultraman exerts himself, the "Color Timer", as it is also called, turns red, then blinks, slowly at first, then with increasing rapidity as his energy reserves get closer to exhaustion. As the voice-over narration reminds the viewer, beginning with episode 2 and for each episode thereafter, if Ultraman ever reaches the point of total energy depletion, he "will never rise again". In episode 39, "Farewell, Ultraman," Ultraman fights an enemy called Zetton, leader of an army of monsters bent on destroying all the Ultra Crusaders, who employs an unexpected weapon against Ultraman one which damages his Color Timer and disables his ability to measure his power supply. As a result, Ultraman stays in his full-size form too long and collapses into a dormant state. Fortunately, despite this loss, the Science Patrol's members are able to defeat Zetton on their own. When Zoffy, Ultraman's superior, comes to retrieve the fallen hero, Ultraman pleads for Hayata's life and offers his life completely, so that Hayata may live as a normal man. Zoffy then says he has brought two life forces and that he will give one to Hayata. He then separates them, giving Hayata new life, but Hayata seems to have no memory between the time he first collides with Ultraman's ship (in the first episode), and his standing outside Science Patrol Headquarters as he watches Zoffy take Ultraman home. This is a rather different finish to the series than stated in the English dub, which states both that Ultraman will return and that Hayata retains his Beta Capsule as he awaits Ultraman's return.

In 2006, BCI/Eclipse officially released Ultraman on DVD under license from then rightsholder Chaiyo Productions. These releases featured the original Japanese soundtrack and the English dub. When Navarre folded BCI/Eclipse in December 2008, the series was shuffled over to Navarre's other home video label, Mill Creek Entertainment. In June 2009, Mill Creek re-released the complete series set on September 29, 2009, in a 4-disc set with the same special features.

In Japan, there have been numerous releases in numerous home video formats over the last 25 years (from VHS to DVD) on several labels, including Bandai's various home video divisions, including Bandai Visual. On April 2013, Tsuburaya held a press conference announcing the new Ultra Series show and character, Ultraman Ginga, where they also announced that the original 1966 show will be given an HD remaster treatment in Japan.

On July 2013, Tsuburaya released an HD transfer of Ultraman on Blu-ray titled Ultraman HD Remaster 2.0, to commemorate the 50th anniversary of Tsuburaya Productions. Tsuburaya plans to release the series on three separate box sets, each containing 13 episodes. The first box set was released on July 10, 2013, the second on October 25, 2013 and the final set is planned for January 29, 2014.

A Malaysian DVD Boxset was released by VGB Network in 2013, containing Malaysian subtitles and English subtitles.

Bandai published the video game PD Ultraman Battle Collection 64 for the Nintendo 64 in 1997.

On November 2013, a source close to Chaiyo Productions told the website Nuke the Fridge that an English-language feature film is in development for a targeted 2016 release. The studio plans to approach several A-list actors for the lead role, including Will Smith, and plan to produce the film in a style similar to Pacific Rim. Though the website's closure may mean the project is at close.

Malaysia has banned an Ultraman comic book because it uses the word "Allah" to describe the Japanese action hero. The Home Ministry said in a statement Friday (7/3/2014) that the Malay-edition of "Ultraman, The Ultra Power" contained elements that can undermine public security and societal morals. It said "Ultraman is idolized by many children" and equating the lead character, Ultraman King, with Allah would especially "confuse Muslim children and damage their faith". Allah, the Arabic word for God, is commonly used in the Malay language to refer to God. The government says Allah should be exclusively reserved for Muslims because of concerns its use by others would confuse Muslims and tempt them to convert. Malay Muslims account for about 60 percent of Malaysia's 30 million people, while Christians makeup about 9 percent of the country's population. The ministry said Allah is holy for Muslims and warned that such irresponsible use of the word can provoke the community and threaten public safety. Ultraman is a fictional Japanese superhero who fights monsters and first appeared on television in the 1960s. A line in the book said Ultraman "is considered and respected as Allah, or the Elder, to all Ultra heroes". "The Ultraman character itself is not banned and only this edition is prohibited", the ministry said. Anyone caught distributing the book could be jailed three years, it warned. The government's stand over the word Allah has sparked a controversy in this multi-racial Southeast Asian country, where many Malay-speaking Christians commonly use Allah to refer to God.Religious tensions have been high in the past five years after the Catholic church went to court to seek the right to use Allah in its weekly newspaper. A lower court last year ruled in favor of the government, which the Catholic church has appealed to the country's highest court. The Federal Court said Wednesday it will decide at a later date whether to hear the case. The Ultra Series however is very popular in Malaysia. 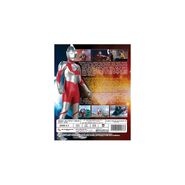 Retrieved from "https://ultra.fandom.com/wiki/Ultraman_(series)?oldid=405128"
Community content is available under CC-BY-SA unless otherwise noted.