Ultraman is the 2nd entry in the Ultraman Series

Ultraman: A Special-Effects Fantasy Series (ウルトラマン 空想特撮シリーズ Urutoraman: Kūsō Tokusatsu Shirīzu), more simply and widely known as Ultraman (ウルトラマン Urutoraman), is a Japanese tokusatsu television series that first aired in 1966 and is a follow-up to the television series Ultra Q, though not technically a sequel or spin-off. The show was produced by the Tsuburaya Productions, and was broadcast on Tokyo Broadcasting System (TBS) from July 17, 1966 to April 9, 1967, with a total of 39 episodes (40, counting the pre-premiere special that aired on July 10, 1966).

Although Ultraman is the first series to feature an Ultra-Being, it is actually the second show in the Ultraman Series; Ultra Q was the first. In fact, Ultraman opens with the Ultra Q logo exploding into the Ultraman logo. Ultraman ultimately became a major pop culture phenomenon in Japan and then in Asia, and the rest of the world. The show's success spawned dozens of sequels, spin-offs, imitators, parodies and remakes.

This series is said to take place at some point in the 1990s; this was retconned once Return of Ultraman was released in 1971, placing the events of the series in the year of its production, 1966.

The first series begins when SSSP member Shin Hayata is flying his plane and a red sphere of light crashes into his Sub VTOL. The sphere turns out to be the transport (Travel Sphere) for a red-and-silver giant being who calls himself Ultraman. Feeling remorse for having killed the human, he merges his essence with Hayata to revive him. In return, Hayata serves as the human form for this being, and whenever danger threatens, and the resources of the Science Patrol are not enough to counter it, he raises and activates a device called the Beta Capsule and transforms to Ultraman to save the day.

Ultraman's central characters were created by Eiji Tsuburaya from Tsuburaya Productions, a pioneer in special effects who was responsible for bringing Godzilla to life in 1954. The show's predecessor was a series called Ultra Q, a black and white series with 28 episodes very much like the original Outer Limits, although some compare it to today's The X-Files or The Twilight Zone.

The Ultraman series used various monster costumes, known as kaiju in Japan, prior to other series such as Kamen Rider and Himitsu Sentai Gorenger. The principals were played by famous monster suit actor Haruo Nakajima, who performed as the original Godzilla. Another Toho actor, Satoshi "Bin" Furuya, was sought out for the role of Ultraman, because of his tall stature and perfect proportions. Nakajima had an outdoor-sports and martial-arts background, and they decided that Ultraman would not seem alien if he was using earth-bound martial arts techniques. So Ultraman's fighting style was a mixture of grappling, Greco-Roman wrestling, and some Japanese martial arts, which evolved during the course of the series. Often costumes of famous monsters like Godzilla (as Jirass in "The Mysterious Dinosaur Base") and Baragon would be recycled and altered, sometimes with nothing more than spray paint and often while the actor was still inside. Nakajima quipped once that the staggering gait of some of the monsters he portrayed was due less to his acting than to the fumes he had to endure. Some of the quadrupedal monster costumes could not be shown fully as his legs dragging on the ground would have been exposed, a necessary allowance to maintain balance in the often cumbersome outfits. Also, the expense of repairing the scale cities and landscapes used for battle scenes required economy of movement and meticulous planning.

In 2006, BCI/Eclipse officially released Ultraman on DVD under license from then rightsholder Chaiyo Productions. These releases featured the original Japanese soundtrack and the English dub. When Navarre folded BCI/Eclipse in December 2008, the series was shuffled over to Navarre's other home video label, Mill Creek Entertainment. In June 2009, Mill Creek re-released the complete series set on September 29, 2009, in a 4-disc set with the same special features.

In Japan, there have been numerous releases in numerous home video formats over the last 25 years (from VHS to DVD) on several labels, including Bandai's various home video divisions, including Bandai Visual. On April 2013, Tsuburaya held a press conference announcing the new Ultraman Series show and character, Ultraman Ginga, where they also announced that the original 1966 show will be given an HD remaster treatment in Japan.

On July 2013, Tsuburaya released an HD transfer of Ultraman on Blu-ray titled Ultraman HD Remaster 2.0, to commemorate the 50th anniversary of Tsuburaya Productions. Tsuburaya plans to release the series on three separate box sets, each containing 13 episodes. The first box set was released on July 10, 2013, the second on October 25, 2013 and the final set is planned for January 29, 2014.

Mill Creek Entertainment also released the series under Blu-Ray and Steelbook editions in 2019, along with Ultra Q. The company would also release an exclusive "The Birth of Ultraman" collection on Ultraman Day (July 10), 2020, which features The Birth of Ultraman pre-premiere special, along with select episodes (1, 2, 19, 26, 27, 33, and 37) of the series, in both Japanese and English dubbed audio. 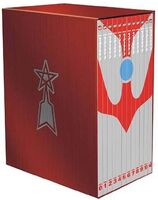 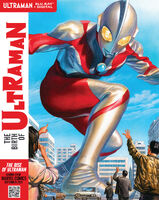 The Birth of Ultraman collection 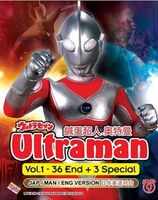 Ultraman VGB Network Release
Add a photo to this gallery
Retrieved from "https://ultra.fandom.com/wiki/Ultraman_(series)?oldid=518797"
Community content is available under CC-BY-SA unless otherwise noted.