The very first Ultraman figure is released along with the other Ultras/Monsters figures from the Ultra Collection lineup. He sports 3 points of articulation on the shoulders & waist, which is a design standard to all Ultra Hero Series toys.

The figure also comes with a collectible data card.

Release as a first part of the Super Grade Soft-Vinyl subline, This Ultraman toy is an entirely new mold. The figure was bundled with an unchanged Zetton. The Ultraman figure in this set is referred to as "First Ultraman (初代ウルトラマン)".

Although released as an Ultraman Club & M78 Shop exclusive, the 2-pack saw release in large quantities in Toys R' Us Japan.

A new show accurate, more proportioned mold of the first Ultraman toy, released as part of the 2000 release of the Ultra Hero Series lineup. His pair of eyes also features a yellow-and-white gradient paint operation that evokes the helmet's glowing eyes.
He also comes with a collectible data card, with the picture depicting him fighting Red King (Generation 2). The front, side box, and the figure depict him as C-type while the photo on the back and the card depicts him as B-type.
Ultraman is reissued twice in 2000 and 2003, with the same package sans the production year. He is released again thrice for the 2004 lineup, bearing the 2003 production number.

A rerelease of the 2000 UHS Ultraman figure, this toy is bundled with an unchanged Ultra Monster series Zetton. The set was released for the Asian markets outside Japan, such as Hong Kong.

An unchanged 2000 UHS Ultraman toy is bundled with Peguila, & an Ultraman Tiga UHS figure (which was redecorated from the Sky Type mold).

A new mold based on a A-type Ultraman Suit.
He also comes with a collectible data card, with the picture depicting him fighting Bemular.

Released as an Ultraman Festival 2001 exclusive set, the Ultraman figure is a glitter clear-red redeco of the A-type figure. The toy was bundled with a different deco of Bemular, and a pair of orbs to represent their arrival to Earth in the first Episode.

A glitter-red redeco of the 2000 Ultraman UHS figure. The toy was entirely unpainted, save that for his eyes. He was bunded with a dark grey smoke deco of the Gomess figure. The figure set was limited to AFFE2, which was held in New Jersey, USA.

The Asia release of the toy had his titular logo replaced into Ultraman Mebius's. 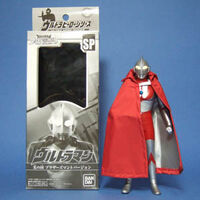 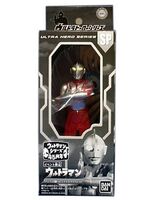 Available as an Ultrfest 2012 exclusive, this Ultraman is a redeco of the original 2000 toy with the retooled arms from the 2009 release, and he's cast in clear colored plastic and features red-and-silver paint operations while his legs are decoed to present his teleportation ability seen in Science Patrol Into Space. However, the figure's appearance in mostly inaccurate due to the use of the C-type mold, rather than the show's B-Type. 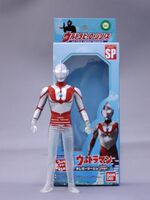 Packaging with Figure
Add a photo to this gallery

Packaged with Baltan, this Ultraman figure is a re-release of the 2009 retool, with a mantle & a base piece to stabilize it's mantled form. Unfortunately, some of Ultraman's paint details (mostly the back of the waist/spine) is omitted.

NOTE: All Ultra Hero 500 figures are compatible with the DX Ginga Spark.

A smaller version of the Ultraman figure, the toy features a Live Sign stamp under his left foot, which can be scanned with the Ginga Spark, and it unlocks one of the spark's sound effects: "Ultlive! Ultraman!". If the trigger is pulled to reveal Ginga's face, Ultraman's Transformation sound effect is played. If scanned with the DX Dark Spark, it does not open the Device's face hatch.

From most of the figures in this line, Ultraman is one of the few toys to have its details fully painted.

In 2016, Ultraman is re-released under the "Ultra Hero Series" re-branding, lacking the live sign.

A glitter-red and gunmetal redeco of UH500 Ultraman, this toy is bundled with the first issue of Super TV Kun x Ultraman Ginga Magazine.

Scanning the figure's Live Sign activates the "Ultlive! Ultraman Dark!" and the transformation sound clip, but does not open both the Ginga Spark and Dark Spark's face hatch.

An actual Ultraman Dark figure is released as a new mold, and he shares an identical Live Sign from the Super TV Kun exclusive freebie.

A golden redeco of the original Ultra Hero 500 Ultraman toy, he comes with a similarly decoed Ultraseven, Ultraman Jack, Ultraman Ace, Ultraman Taro, and Zoffy figures. Unlike the previous toys, this Ultraman does not come with a Live Sign to scan with.

The Ultra Hero 500 Ultraman figure is once again reissued for China's markets. Packed in a blister card, Ultraman comes with a Father of Ultra Ultra Capsule, which is compatible with the Geed Riser accessory.

Unlike previous releases, Ultraman had half of the paint operations (notably the lower legs) omitted due to the price point.

ULTRA-ACT Ultraman is the first Ultra-Act released, and he features multiple points of articulation and features his trademark special effect parts, including the mantle seen in Mega Monster Battle: Ultra Galaxy Legends The Movie.

Sadly most of the first Ultra-Act Ultraman figures had quality control issues: the figure suffered from having unstable plastic quality in some areas & loose joints, making the figure prone to breakage.

The hand parts are later reused for the Tamashii Features Vol.2 exclusive Imitation Ultraman. The figure also saw a reissue on May 21, 2011, presumably reusing the amended joints from the first Imitation Ultraman figure.

A new mold (& an improved version) of the first Ultra-Act Ultraman figure. In addition to the impact effect pieces, He also comes with the same finisher effects, albeit more vicious-looking.

His rear spine also features a port for the individually-released Mantle accessory. Ultraman also comes with a triangle-shaped adapter, which allows him to attach onto the Tamashii Stand. (sold separately)

Ultraman can also latch on the Golgotha Cross accessory included in the Tamashii Webshop exclusive Ace Robot, and is also compatible with the Ultra Water Current effect included in the 2014 Imitation Ultraman figure.

Available with Ultraseven Dark, Ultraman Dark is an all-new mold based on his appearance in Ultraman Ginga. He comes with a recolored Specium Ray and Ultra Slash effect parts.

The set was available as a Tamashii Webshop exclusive, with preorders opened on June 5, 2014, till July 28, 2014, and it will be shipped out for customers on October 24.

A pair of new molds based on Ultraman A-type & B-type suits were shown at Tamashii Nations 2012, currently as a sample display. Since the line is being replaced with S.H. Figuarts, the figure will likely never saw release in the future. 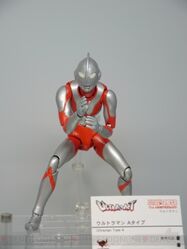 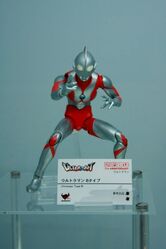 Released under the S.H. Figuarts line, Ultraman is an all-new mold that stands 15cm tall as with the rest of the figures from the same line. Other than several pair of hand parts and a red color timer crystal, He also includes a Specium Ray hand, and the Ultra Barrier effect, which can be fixated with a stand. He can also use the Ultra-Slash hand from the Tamashii Webshop exclusive S.H.Figuarts Mefilas figure.

Unlike the Ultra-Act release, S.H. Figuarts Ultraman features a matte finish on his silver paint.

Another release of the S.H. Figuarts Ultraman figure, with several new accessories including props from the Tamashii line. The set also comes with a miniature Alien Baltan ship prop, which can be fixated with the included Tamashii STAGE.

Another new mold of the Ultraman figure, which is based on his A-type suit. Unlike the first S.H.F. figure, Ultraman A-type does not include the Ultra Barrier accessory.

Despite contrary rumors, the slightly bent upper fin on the helmet is not poor quality control.

Released as part of the "Best Selection" line (A series of reissues), this Ultraman is the reissue of the original figure, omitting the Specium Ray hand and the Ultra Barrier effects for the sake of the lineup's 3500 yen price point.

Note: The only way to identify whether the boxes come with the said character is by inspecting the upper box.

Released as part of the Shodo toyline, this Ultraman is a 3.75-inch figure that is molded in red PVC and ABS plastic with Silver and some blue & cream paint operations and features 16 points of articulation and swappable hands, which is needed to be trimmed off from the runner. Like all candy toys, Ultraman comes with a soda-flavored gum.

The Bandai Candy Online Shop exclusive Brother's Mantle can attach onto this figure.

A new mold based on the A-Type design, this Ultraman is now molded in red ABS and strangely light blue PVC plastic painted over. He also features the same accessories from the previous toy.

Like the first toy, the webshop exclusive mantle can mount onto this figure as well.

Released as part of the 4th volume of the Chodo lineup, this Ultraman is similar to the Shodo figure, but he's actually an all-new mold, featuring an additional articulation point on the waist, and his hip section is now sleeker and slighty more proportionate. His head and color timer are now molded in translucent plastic, with the former being painted on.

The Specium Ray hand & the Ultra-Slash hand from the 3rd Expansion Set can be attached to this figure. 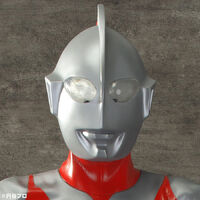 Add a photo to this gallery
Retrieved from "https://ultra.fandom.com/wiki/Ultraman_(character)/Merchandise?oldid=512258"
Community content is available under CC-BY-SA unless otherwise noted.