TBA
The version of Ultraman from the 2003 manga series Ultraman THE FIRST.

Like in the original series, Ultraman came to Earth in pursuit of Bemlar, crashing into Shin Hayata's aircraft. As a result, Ultraman fused with Hayata and gave him the power to transform into him via the Beta Capsule.

At the end of the series, Ultraman separated from Shin and joined with Zoffy, who gave Shin and Akiko the Life Forces he had. Zoffy and Ultraman returned to the Land of Light so he could be healed of his injuries.

This Ultraman has a rise similar to the original's, although it was only seen once. When Hayata used the Beta Capsule he was wrapped in light which begins to form Ultraman's body. 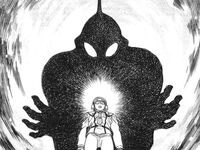 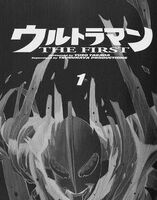 Retrieved from "https://ultra.fandom.com/wiki/Ultraman_(THE_FIRST)?oldid=512240"
Community content is available under CC-BY-SA unless otherwise noted.