TBA
The version of the original Ultraman that appears in the Story 0 manga.

One of the scientists working on the Plasma Sun project, Ultraman was one of the first if not the first to be transformed into an Ultra. As with the other Ultra Brothers and warriors he was present when the Baltans revealed their guilt in the sabotage of the Plasma Sun and belligerent intentions. He, with many others, left the Land of Light to combat the various monsters that would surely appear all over the galaxy.

Some time later, while the Baltan projection was halted in its attempts to snuff out the flame of the Ultra Tower, Ultraman was on the Moon fighting several Sadolas, while one was cannibalized by the others, Ultraman caught the other two and placed them in a sphere to be sent home for study. However, the sphere was destroyed by a beam to which Ultraman turned to see a Baltan with a still smoking claw. 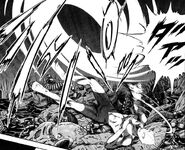