"Are you an "extraterrestrial"? Or a human?"
"I am both. It depends on how you see me because I prefer to be in-between."

Tohl Narita (base design)
Hideaki Anno (first draft)
Ultraman (ウルトラマン Urutoraman) is the titular character of the 2022 film Shin Ultraman. He is a reinterpretation of the similarly named character from the 1966 TV series.

The first concept art was made in October 3, 2018 by Hideaki Anno, using Ultraman's first suit actor Bin Furuya as a base for the body frame.[3] Wanting the Ultraman's design to live up to Tohl Narita's vision, Anno sought permission from Narita's son, Kairi, to use the 1983 painting Incarnation of Truth, Justice, and Beauty (真実と正義と美の化身 Shinjitsu to Seigi to Bi no Keshin) as a reference.[4][5]

The final design of Ultraman took various design cues harkening back to its original draft, such as:[5]

In addition, the design also seemingly takes elements from suits used in the 1966 series, such as the C-type suit's facial features and the B-type suit's slightly pointed feet. The red lines on the body and legs were also made to be more angular than those typically seen in other appearances.

The finalized design was first publicly unveiled in late 2019, at Tsuburaya Convention (Tsubucon). In addition to its modeled figurine (both in white and colored versions), a CGI photo was unveiled as a reference scale of Ultraman to his surroundings. In November 2020, a statue of Ultraman was placed in Sukugawa, Fukushima, the birthplace of Eiji Tsuburaya, in the Sukagawa Tokusatsu Archives Center.[6]

The Spacium Beam used in the movie was animated by Sadao Iizuka, who had worked on the original Ultraman's Spacium Beam, and others.[7]

Incarnation of Truth, Justice, and Beauty

Model figurines of Ultraman from Tsubucon

The Ultraman statue in Sukugawa, Fukushima in his Spacium Beam stance 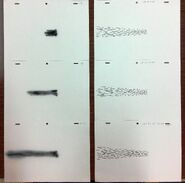 Spray-painted Ultraman figurine, later used to represent his first appearance in the movie.[8]

Ultraman transforms into his true form from Shinji Kaminaga, a human that he bonded and impersonated as. "Shinji" does this through the Beta Capsule, wherein he presses the button. During the transformation, Ultraman's translucent red fist surfaces and grabs "Shinji", and rises from human size to his true height as a flash of red light accompanies the transformation. 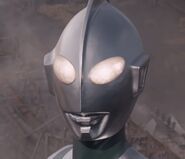 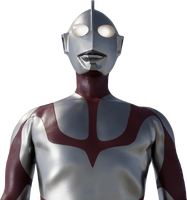 A bust-level shot of Ultraman from Nippon TV.[9]

Kairi, Tohl Narita's son alongside the concept figurines of Ultraman. 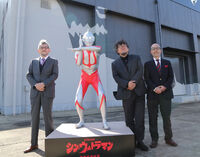 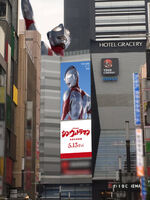