―Ultraman introduces himself to Eiji Tsuburaya, The Ultra Star

Shunsuke Gondo
The Neo Frontier Space World version of Ultraman (ウルトラマン Urutoraman) is an Ultra Warrior who somehow didn't have a relation to the Ultra-Ancient Giants of Light, instead hailing from an alternate version of Nebula M78 present in the Neo Frontier Space World. After sealing Yanakargie beneath a lake in 1965, he returned in 1996 to help Ultraman Tiga fight the Space Dinosaur when the time-traveling alien Charija sought to use the monster for nefarious purposes.

In the year 1965, the hero Ultraman chased the evil monster Yanakargie to Earth and sealed him away in a lake. Meeting Eiji Tsuburaya, he gave him a stone called the Ultra Star, which could summon him no matter where he was in the universe. Following Charija into the past, Daigo of GUTS was too late to stop the evil monster from being freed by its master. The alien controlled the beast and it started to destroy a town until Daigo transformed into Ultraman Tiga. He started to fight, however, the monster was too powerful for him. Yanakargie grabbed him, and started to siphon Tiga's energy, but before Tiga would die, Tsuburaya used the Ultra Star to conjure a red flying orb which struck the monster. The red orb transformed to reveal it was actually Ultraman. Ultraman restored Ultraman Tiga's energy and both used their signature beams to defeat the beast. Before Ultraman left, he saluted Ultraman Tiga, a salutation that connected both universes. Tsuburaya who watched everything and had told his writer about his first encounter with Ultraman went on to create the series that saved his company from going under and kept it going strong well into Daigo's time.

The 2000 Ultra Hero Series Ultraman figure is released as part of the 3-pack along with Peguila and Ultraman Tiga (Multi Type). This Ultraman is unchanged from the regular release.

The set is exclusive to the Asakusa Ultraman Club store.

Ultraman is released as part of the "Tiga to Dyna" 24-pack mini-figurine box set. He is molded in his rising gesture.

Released as the 100th S.H.Figuarts Ultraman figure and the 2nd figure for the Shinkocchou Seihou subline, this Ultraman is a more robust mold that is based on his on-screen appearance in the third act of the 1966 TV series. As the figure intends to recreate Bin Furuya's (Ultraman's suit actor, who also supervised the figure's production) physique and movements, the chest-to-waist torso is molded in softer plastic, allowing it to bend frontwards.

Aside from his default hand parts and his signature Spacium Beam and Ultra Slash effect, Ultraman also comes with an additional hand that is meant to accommodate with the Shinkocchou Seihou Ultraman Tiga figure to recreate the hand-shaking moment in The Ultra Star.

Ultraman and Tiga after finishing off Yanakargie 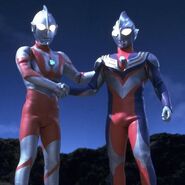 Ultraman before flying away