Ultraman is the titular hero of Marvel Entertainment's comic book series The Rise of Ultraman and The Trials of Ultraman. He is an alien who went to Planet Earth to protect the planet and humanity from an upcoming Kaiju Crisis, though an unfortunate event caused him to have to merge with the human Shin Hayata, who later gave him his name.

Ultraman and his race were called "Ultra" by various species because they had ascended beyond the threat of Kaiju, in that the Ultras had rid themselves of the "darkness of the soul" which Kaiju are attracted to. They decided to use their higher status to demonstrate to other species how to do the same, and would intervene on planets where a Kaiju Crisis was imminent, in hopes of preventing one from truly starting. These are usually planets whose inhabitants are unable to evolve for "a myriad of reasons". After learning that Ultraseven had been killed by humans in the year 1966, Ultraman lost faith in humanity and was convinced that they, too, could not evolve.

In the year 2020, Ultraman was on the way to Planet Earth after detecting a Kaiju Crisis was about to happen there. While on the way to Earth, his Travel Sphere was shot down by the USP, who had built a railgun specifically for that purpose after Ultraseven crashed into Dan Moroboshi 54 years ago. This severely injured Ultraman, who was once again shot by Shin Hayata under orders from Captain Muramatsu. Still, Ultraman's kindness allowed him to reach out to Shin in a plea for help. When they touched, the merger process began, though it was highly imperfect due to Ultraman's injuries and could have possibly killed the two of them if it were not completed in time. After nineteen hours of negotiations and seeing through each others' memories, Ultraman and Shin came to a compromise, and Shin was handed the Beta Capsule. After that, Shin was sent to the USP base, unconscious for a while.

Shin and Ultraman communicated on their mutual distrust towards the USP before being sent to Doctor Yamamoto's hideout, which was where Kiki was at the time. Ultraman allowed Shin to transform and fight against two Neronga, despite the two of them being made aware of the dangers imposed on them by their incomplete merger. After managing to defeat them, Shin had the secrets of the K-Ray revealed to him. It was then that Ultraman informed him that the dimension that the K-Ray sent Kaiju to was Limbo, a gateway to the Monster Graveyard. Ultraman appeared once again when Shin was sent to was sent to Limbo to retrieve Kiki, using a USP K-Ray to exit the dimension. However, a giant Bemular had followed them out the same way.

Hoping to stop it, Ultraman returned to his normal giant size and fought the creature, holding it for Kiki to help evacuate citizens. During this time she used Shin's communicator to talk to them and relayed her discovery that it was a creature the organization fought back when it was known as "Ultra Q". It was also now that Dr. Yamato appeared in a stolen USP VTOL attacking Ultraman. He wished to let the truth about the Kaiju be known by letting Bemular rampage, a disaster the USP would not be able to cover up. Ultraman spoke to everyone convincing them that the path of fear would not lead to any solutions, and convinced Yamato to assist him. With the Doctor's assistance, Ultraman was able to strike down Bemular with his Spacium Beam, ending the monster completely.

Later on, Shin and Ultraman, after convincing the USP director, shattered the vault in a controlled manner, deciding to deal with the problem directly, instead of allowing the vault to burst and create an unsolvable problem in a Kaiju Crisis. The Rise of Ultraman

Ultraman and Hayata continued to fight against the Kaiju together. However, Ultraman and the USP had been faced with conspiracies and scrutiny from the public, claiming that the USP were responsible for creating the Kaiju in the first place, among other rumors. The Trials of Ultraman

Shin Hayata presses on the Beta Capsule's red button to transform into Ultraman. Because of Ultraman's injuries before the merger process, Shin's transformation is limited to just three minutes because of the imperfect connection between them. Furthermore, the both of them could possibly die if their connection is strained too much via intense combat. 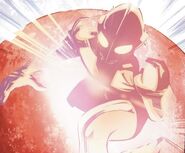