Dragon Force: So Long Ultraman director and BlueArc CEO Tommy Wang stated that the character "presents a new image of the hero Ultraman to the world, in the hopes it can surprise adults and children"[1]. However, when he was first revealed to the public; as a man in shorts, a mask, and covered in body paint (as seen in the "Suit" tab in the infobox), its hideous appearance as well as the fact that it was clearly not authorized by Tsuburaya (The movie was licensed by UM Corporation and TIGA Entertainment[2]), spawned many negative comments on multiple platforms. It is later revealed that Ultraman had been given a radical redesign in the movie (see CGI Model in infobox) and was given an antagonistic role, which further reinforced fans' negative views on the movie, and called it a "faker" and a "domestic ripoff". Even Ultraman Dyna star Takeshi Tsuruno, who has previously played (and continues to reprise) the role of Shin Asuka, openly expressed his disgust towards the movie and its promotional material on Twitter[3], calling out the "fake Ultraman".

Tsuburaya Productions were alerted of these activities and released this statement to notify Ultraman fans that these were done without their permission or supervision, and that they would take legal action against related parties. Tsuburaya then took UMC to court on November 20, 2017 and won the case. Tsuburaya Productions also began releasing shows in the Ultraman Series to Chinese audiences in 2018, starting with Ultraman Tiga, as a way of showing Chinese fans what a real Ultraman was like.

In 1966, Ultraman came to Earth for the first time and became a renowned hero across the world. However, one day, the Land of Light was destroyed by aliens, so Ultraman flew to China in a spaceship and later had two human children (how or with whom is never explained).

Years later, collaborating with his mysterious subordinates, he brings a sleeping sea dragon onto land in an uncharted part of the world for reasons unknown. He then goes to a secret base, where he gives up his powers, draining him of his energy and reducing his size in the process, to create the Genesis Crystal. It sends an energy wave across the planet, and is detected by the GSB, who sends the Dragon Force to investigate.

Ultraman stands around and does nothing for a while (Ironically, Ultraman Geed was airing at the time and Riku Asakura's catchphrase is "Sitting around doing nothing won't get us anywhere") and then sends his minion Bao Feng to attack the Dragon Force when they corner him. He escapes on a motorbike and after a chase, he meets up with another villain, Evan, who punches Ultraman, steals the Genesis Crystal for himself, and then escapes but not before passing him a tablet that conveniently allowed Ultraman to watch Bao Feng who was really his daughter die at the hands of his son, Bluman. He is then remorseful of his actions and uses his telepathic powers to awaken the sleeping dragon to attack Evan's reinforcements, and helps the Dragon Force escape with their lives. He then falls off the side of a cliff in a seeming act of suicide only to escape from certain death by riding his bird mecha. The movie abruptly ends. Dragon Force: So Long Ultraman

Despite Tsuburaya's court victory, the Ultraman character is stated to be appear in 5 more movies, with BlueArc notably claiming that their movies are genuine, authorized and legal.

When Evan attacks the nearby city, Ultraman shows up riding his mechanical bird while his dragon pet attacks Evan, who has now grown into a giant via the Genesis Crystal's power. Ultraman taunts Evan when he notices he starts to shrink, saying that while taking Ultraman's powers, he also took his weakness, before Evan gets dragged off to a remote island by the dragon. In the ensuing destruction, Ultraman finds a boy named Lele, whose mother had seemingly died trying to save him from a great fall. Lele clings to him, pleading to him to save his mother, but Ultraman simply brings him along on his mechanical bird to chase Evan.

Evan manages to slay the dragon and destroys all of its eggs, except for one which soon hatches. Evan shrinks further but is also able to destroy Ultraman's mechanical bird. Bringing his sword down on Ultraman, he explodes and forms a massive mushroom cloud. All that remains of him becomes a mysterious cube which forms around the ring that Lele's mother left behind. A hologram of Ultraman appears from the cube to communicate with Lele, but their conversation is cut short when a baby dragon appears. Meanwhile, the Dragon Force team fights Evan and blasts him off into the ocean.

While sneaking around, Lele finds out that the Dragon Force have a bounty on them, and is eventually caught. His captors take the cube from him and leave both him and his dragon pet bounded. Eventually they are bailed out by a seeming nurse and brought through the air vents of the facility, until they arrive above a giant crystal structure with a woman inside. The cube reacts when Evan reappears and grows to giant size to confront the Dragon Force, who he planned to defeat after revealing that the woman was his wife. Ultraman's hologram reappears and converses with Evan, but Lele changes his personality by rotating one of the cube's edges.

After escaping Evan, Dr. J examines the cube and finds out that the cube's hidden powers may be activated by Lele's fart, of all things. His research proves correct when Lele farts on it when Evan attacks once more, and this time the size of Ultraman's hologram grows even more. Evan eventually defeats the Dragon Force and Lele's now-matured dragon pet and threatens to kill Lele after destroying the cube. Just as Evan is about to swing his sword down on the boy, he puts his hands in a + (or L). Suddenly, there is a large explosion and Ultraman somehow revives at giant size. The dragon reawakens as well, and Evan comments on how this should all be impossible, before being promptly destroyed by a Spacium Beam. Dragon Force: Rise of Ultraman

Ultraman is heavily featured in this sequel series to the original Dragon Force series. Here, he regains his giant size and a few new abilities, which allows him to fight monsters alongside the Dragon Force team, whom assist him by using giant Mechas that he provides them. Dragon Force 2: Power of Ultraman

It can be assumed that he retains all of his mainstream counterpart's abilities such as the Spacium Beam. He should, theoretically, also be able to use Ultraman Jack's abilities, explained in the Inconsistencies, Changes, and Continuity Errors section below. This list of powers is most likely to be incomplete and will stay this way for the foreseeable future due to viewing limitations and difficulty. 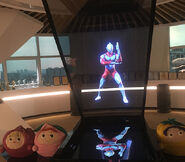 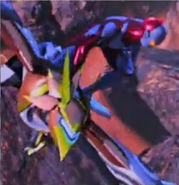