Ultraman: Towards the Future is the 10th entry in the Ultraman Series

ULTRAMAN, We Are Great

The Earth Has Been Waiting For You

Ultraman: Towards the Future, also known as Ultraman Great (ウルトラマン Urutoraman Gurēto) in Japan, is a tokusatsu sci-Fi/kaiju/superhero TV series produced in 1990 in Australia by the South Australian Film Corporation and Tsuburaya Productions, making it the tenth series in the franchise. There were 13 episodes filmed (the first 6 episodes were the "Gudis Threat" story arc). At the time, eco-awareness was at a high, and many episodes included environmental themes. Ultraman's three minute time limit is also attributed to "Earth's polluted atmosphere" in this version. This series also marks the first entry in the Ultraman Series to be produced in Japan's Heisei Era.

The show was originally featured on home video and Laser Disc in Japan on 25 September 1990, and was later broadcast on Tokyo Broadcasting System from 8 July to 30 September 1995. The show was distributed in the United States by Sachs Family Entertainment, and broadcast weekly from 4 January to 28 March 1992.

The series generated a merchandise line including toys, comic books and a video game.

Jack Shindo and Stanley Haggard are members of the first manned expedition to Mars, and on the red planet find a giant slug-like monster, Gudis. Suddenly the giant warrior, Ultraman (Great), arrives and fights Gudis, but is knocked down for a period. Jack Shindo is pinned by a rockslide and Haggard tries to escape in their ship but is blown up by Gudis. It is then that Ultraman gets up, and when he is on the verge of victory Goudes changes into a virus and travels to Earth, where it plans on corrupting all life, mutating other creatures into monsters and awakening existing ones. Needing a human host to survive on Earth, Ultraman joins with Jack, allowing him to become the mighty alien when all seems lost. He joins the Universal Multipurpose Agency, or UMA, in order to help them battle the many monsters that threaten humanity.

The music was composed by Sinsuke Kazato and released by Nippon Columbia Co., Ltd (COCC-9745) in 1992. The soundtrack is very rare, it went quickly out of print and can now only be found used. The music was performed by The Adelaide Symphony Orchestra. 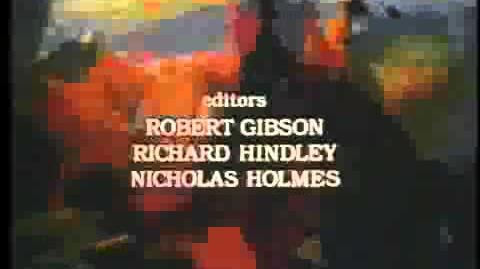 Ultraman - Toward the Future FULL opening.wmv 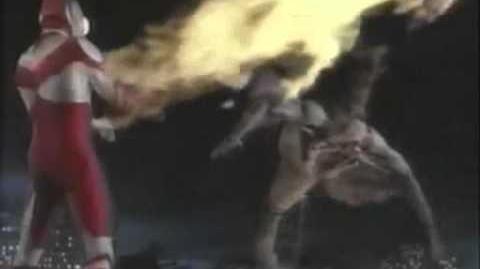 Ultraman Great - Towards the future (Lyrics)
Towards the Future (English Version)

The series also received an equally short-lived toyline from DreamWorks toys. The figures were 10" tall and included Ultraman, who came with a mini Jack Shindo, as well as his enemies Bogun, Barrangas, Majaba, Gerukadon and Kilazee. Also released was a toy of the Hummer vehicle which included a mini figure of Charlie Morgan. A toy of the Saltop was advertised on the back of all boxes, though it was never released or produced according to a Bandai representative. Despite their unique size, the toys were not without their problems. Jack, Charlie and the Hummer were well out of scale with the other toys, while the Ultraman figure lacked articulation. Also, despite being the main villain for the first story arc, neither version of Gudis was released as a toy in the DreamWorks line (although one did appear in Bandai's Japanese vinyl Ultraman line). However, Gudis was mentioned on the packaging of all the figures.

The unreleased Guigasaurus as seen in DreamWorks promotional material.

There were two video releases in the West. In 1990, New World Entertainment distributed two feature versions - Ultraman - The Alien Invasion and Ultraman - The Battle For Earth, which were released in Canada by Malofilm Video. They were slightly letterboxed and some limited post production video effects were added as well as replacing the original narrator John Bonney with Gus Mercurio. In 1993, L.A. Hero released the entire series in 13 voulmes. Some of the releases were taken from the television syndication video masters and still had the commercial bumpers.

Emotion released the entire series on Laserdisc. In Japan, Ultraman Great's voice was replaced with the standard Ultra kiai, with his Color Timer's sound being reused from the original's.

In 2017, the entire series was released on Blu-ray in Japan, with both English and Japanese dubbed language tracks, and a total two versions of the TV show: English Hardsubbed, and Japanese broadcast. The release also features two compilation movies also in original English, non-hardsubbed release. All of the Episodes are upscaled and slightly modified from the Japanese broadcasts.

A comic book retelling of/sequel to the series, published in early 1993 by Harvey Comics' short-lived "Nemesis" label, was printed in the United States. However, the comic treats Ultraman Great as the same Ultraman from the original 1966 series. The comic has also been known to confuse Ultraman: Towards the Future with the subsequent American-produced series, Ultraman: The Ultimate Hero (which was released as Ultraman Powered in Japan), of which the comic had included plenty of full-color publicity pictures in many issues to generate interest. After 8 issues (most of these issues had different collectible cover variants, a trend prevalent in the "Speculator Boom" at the time), the comic series was canceled once Harvey Comics went out of business the next year.

As revealed by Sho Aikawa there were plans to make a season 2 of Great. While most information on it is unknown, what is known is that it would've continued after the finale of season 1 with Ultraman Great returning to Earth to protect it from more monsters and aliens. The Alien Baltan was set to appear as alien invaders in a three-episode storyline with some other popular Ultra monsters potentially showing up as well. Veronica and Ryugulo were to come back and assist the Ultra in defending Earth, mainly in the Baltan's invasion. The Ultra Brothers were also considered for guest appearances. The season would've had 14 episodes in total or episodes 14 - 27.

There was a movie idea thrown around about Ultraman Great visiting Japan and stopping a powerful villain there. Not much else is known really beside the fact of potential crossovers with Showa Ultras.