Ultraman: The Ultimate Hero is the 11th entry in the Ultraman Series

Ultraman: The Ultimate Hero, also known as Ultraman Powered (ウルトラマンパワード Urutoraman Pawādo) in Japan, is a tokusatsu show co-produced by Major Havoc Entertainment (later renamed Steppin Stone Entertainment) and Tsuburaya Productions in the United States in 1993, running for 13 episodes. Following the footsteps of the Australian-produced Ultraman: Towards the Future, this was the second live-action Ultraman Series produced outside Japan and the eleventh entry in the franchise overall.

Despite being produced in America, the show was never broadcast there. Although the costume designs are vastly considered impressive, the action was quite downplayed compared to other installments of the Ultraman Series, due to the costumes being fragile and fear by the production staff of damaging them after the hard work put into crafting them.

Titled Ultraman Powered for Japanese release, the show was released on home video there on December 17, 1993, and later aired on Tokyo Broadcasting System from April 8 to July 1, 1995.

However, after this series, Tsuburaya has since focused on domestic productions.

The members of WINR (pronounced "Winner") respond when members of the alien Baltan race attack Earth, but the Baltans are only fended off when a gigantic alien, Ultraman Powered, joins with WINR member Kenichi Kai and gives him the power to metamorphose into Ultraman in times of danger. At the end of the first episode Ultraman declares that the Baltans were not completely defeated and that he will remain on Earth to continue the fight.

Veteran makeup artist and Ultraman Series fan Steve Wang was briefly involved with the production of the show. He and his team created a miniature suit model of Ultraman which Tsuburaya Productions approved. 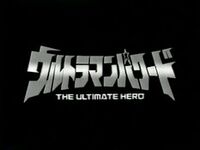 Scott Rogers (in his Ultraman suit) in the set.

Powered's suits, with only 13 made.
Add a photo to this gallery

Retrieved from "https://ultra.fandom.com/wiki/Ultraman:_The_Ultimate_Hero?oldid=530885"
Community content is available under CC-BY-SA unless otherwise noted.