Ultraman: The Adventure Begins was an animated movie joint produced by Hanna-Barbera and Tsuburaya Productions in 1987. The movie was titled Ultraman USA (ウルトラマン, USA Urutoraman Yū Esu Ē) for its Japanese release in 1989. The movie was intended as a backdoor pilot for an animated series, but no such series ever emerged. However, the costumes based on the three main heroes (the Ultra Force) were made for use in stage shows in Japan.

Scott, Chuck, and Beth, a trio of stunt pilots, experience a strange burst of light during a stunt show. In spite of their planes crashing as a result, they emerge unharmed. They are soon contacted by an agent from outer space (whose secret identity is the groundskeeper of a Pebble Beach golf course), who informs them that they've become the host forms of three alien warriors who've arrived to protect the planet from a group of monsters from the planet Sorkin. The three pilots become the members of a group called the Ultra Force headquartered within Mount Rushmore. They are equipped with futuristic fighter ships, and when in particularly great danger they automatically assume the forms of the alien warriors. After defeating the final Sorkin monsters, the warriors remain on Earth to protect it from further danger.

An early pilot film treatment from 1986 had a working title of "The Evil That Men Do: An Ultra Adventutre" with a different premise and cast of five Ultra characters although the main one was still referred to as Scotty, perhaps a holdover from the earlier U.S. adaptation of Ultraman Joneus which was also helmed by screenwriter Jeff Segal.

The music was composed by Shinsuke Kazato and released by Nippon Columbia. The soundtrack was released as a Limited Edition printing of 5,000 copies. Kazato would go on to compose the Soundtrack to Ultraman Great, and both works feature the same main theme. 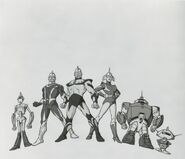 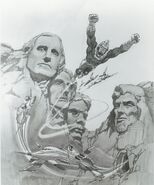 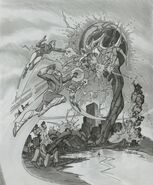