Premium Bandai later released the DVD version as a special set with 18 gashapon figures based on the appeared characters. In addition, the set includes a chapter of the new sequel manga by the original authors, starring Ultraman Mebius.

The story is set in the year 3026, decades after the Inter Galactic Defense Force have integrated peace throughout the universe. Earth celebrates their hundredth anniversary of their joining the Galactic Federation with a special match featuring Fighter Ultraman vs. Great Emperor Mefilas. Meanwhile, Ultraman Taro and the other brothers are on a mission to destroy the Tsuiphon comet heading towards earth, but the comet emerged as a powerful lifeform leaving Taro's team defeated.

Arriving on Earth, Tsuiphon battled against Ultraman where not even his Super Fighter form is enough when Tsuiphon evolved into its own Super Form. With Ultraman defeated, all seemed hopeless as the remaining allies (Seven, 80 and the Ultra Garrison) couldn't take down Tsuiphon. But an injured Mefilas (with an equipped energy amplifier) challenges Tsuiphon again at the cost of his life. Ultraman awakens in time to reach Mefilas in his final breath, and re-challenges Tsuiphon only to be defeated again. On the verge between death, Ultraman hears the universe's prayers when his Color Timer evolved into the Delta Star regaining his Super Fighter powers and destroying Tsuiphon once and for all. With the fight ended, Ultraman holds Mefilas's body while gazing upon the Earth. 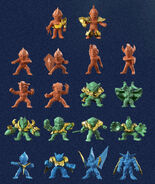 All 18 re-releaed figures included in the DVD set
Bahasa Indonesia
Community content is available under CC-BY-SA unless otherwise noted.
Advertisement