In use
Ultra Zero Eye (ウルトラゼロアイ Urutora Zero Ai) is Ultraman Zero's transformation item. It is designed after his father's Ultra Eye. When not in use, it is stored within the Ultra Zero Bracelet, which is now the Ultimate Bracelet.

In Ultraman Geed, it was upgraded into the Ultra Zero Eye NEO, which is compatible with the Riser.

Although Zero debuted in the previous movie, it was during the crisis of Belial Galactic Empire that this device debuted, which he used to return to his true form after possessing a human host named Run. After his second transformation and separation from Nao and Emerana, Run/Zero was captured by Belial while the tyrant kept the Zero Eye until Mirror Knight frees Run for him to regain the device and transforms again to put an end to Belial's empire. Ultraman Zero The Movie: Super Deciding Fight! The Belial Galactic Empire

When bonded to Nozomu Taiga as a host, the human was reluctant to transform, only being forced into it when Zero telekinetically slapped the Ultra Zero Eye onto the youth's face. Since the transformation was forced, his height is rendered to a mere height of 5 meters.

After Taiga regains his faith in Ultramen, he had properly transformed with said device. Ultraman Saga

The upgraded version of Ultra Zero Eye, it was acquired at some point in time before his arrival to Earth. Since the Ultimate Bracelet was damaged during his time on Earth, the Ultra Zero Eye NEO was kept hidden in Leito's blazer. When Zero was forced to sacrifice himself to Galactron in a hostage crisis, the item briefly petrified in response to his death. Ultraman Geed

Even after the bracelet was fixed, Zero was shown using it again during his brief return to Earth. Ultraman Geed The Movie: Connect the Wishes!

Once they do it, the ribbons of light and the Zero Sluggers appear with Zero's body materializing on the human host's before the Zero Sluggers attach and appear. During Taiga's second and final transformation as Zero, he jumps in mid-air and is surrounded by multiple light streams. At that time, Zero's three illusory images merge with him to complete the transformation.

Aside from conventional transformation item, closing the goggle allows their user to utilize Gun Mode (ガンモード Gan Mōdo), firing laser ammunitions. This was used by Run (Zero) to save Nao and Emerana from a falling pillar before he loses grip of the Ultra Zero Eye.

Ultra Zero Eye NEO (ウルトラゼロアイ Urutora Zero Ai Neo) is the evolved version of original Ultra Zero Eye. The button on the side can be pressed to activate the transformation, or it can be set on the Riser to transform into Zero Beyond after scanning the New Generation Capsules.

Released as part of the DX Transformation devices, the Ultra Zero Eye is capable of converting from Zero Eye mode or Gun mode, and it features light and sound gimmicks depending on which form the device was in.

Released as part of the DX Transformation devices, the Ultra Zero Eye NEO includes the New Generation Capsule Alpha & Beta and allows Ultraman Zero to transform into Ultraman Zero Beyond. 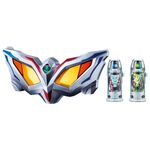 Released as a Premium Bandai Online Shop exclusive, this Ultra Zero Eye NEO is a paint-heavy redeco of the DX device above, sporting excessive silver paint operations. Instead of coming with some Ultra Capsules, this device features a whopping 50 voice lines from Ultraman Zero and Leito Igaguri.
Preorders for this item are open in November 30, 2017 at 11 am, and it closes at December 27, 2017 at 11 pm in Japan. The item will be shipped out at March 2018.

A smaller, child-sized Ultra Zero Eye is available individually in 2010, and with the Saga Brace in 2012. Unlike the DX device, the light and sound gimmicks are stripped off.

Another smaller Ultra Zero Eye is also available with this set, only featuring the light-up gimmick on it's Zero Eye mode. 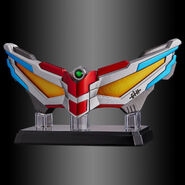 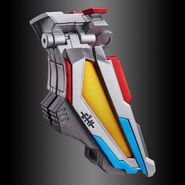 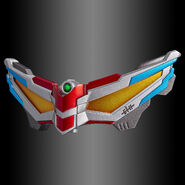