Ultra Science Fantasy Hour (ウルトラ空想科学時間 Urutora Kūsō Kagaku Jikan) is a video distribution project created by Tsuburaya Productions as part of their “Stay At Home With Ultraman” project held by Ultraman Foundation in light of the global COVID-19 pandemic.

"This video distribution project will allow Tsuburaya’s fans all over the world enjoy the world of science fiction crafted by Tsuburaya Productions over its many years of operation. Many of Tsuburaya’s works incorporate messages that we would like to share at this time.
These ten carefully selected episodes and messages will be released on Tsuburaya’s ULTRAMAN OFFICIAL YouTube channel weekly on Sundays at 10 am. When each episode premiers at 10 am, you will be able to chat with other fans in real time while watching the episode. Each video will also be available until the end of the next month. (※The final episode will be available until the end of July.)
We hope you have a fun, relaxing, and exciting time in the world of Ultra Science Fiction!
Let us know what you think of each episode on social media with the hashtag #UltraScienceFantasyHour or #ウルトラ空想科学時間."

At the beginning of each episode released for the campaign, Masao Nakasone's Ultraman grunt is played, followed by the “Stay At Home With Ultraman” title card that appears briefly. 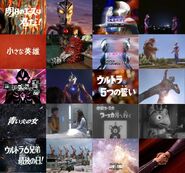 The collection of episodes for the campaign

As part of the "Stay At Home With Ultraman" campaign, wallpapers for video calls and telework were shared by Tsuburaya Productions[3] and Ultraman Galaxy[4] on Twitter. These wallpapers included screens from Mega Monster Battle: Ultra Galaxy Legends The Movie, the New Generation shows, Ultra Galaxy Fight: New Generation Heroes, the ULTRAMAN anime and SSSS.GRIDMAN.