Produced in black and white by Tokyo Broadcasting System/Tsuburaya Productions, this is actually the first of the long-running Ultraman Series, and was broadcast at every weekend at 19:00-19:30 (JST) on Tokyo Broadcasting System from January 2 to July 3, 1966 (the final episode was preempted until December 14, 1967), with a total of 28 episodes. This series was followed a week later by the more popular Ultraman, the second entry in the Ultraman Series.

Ultra Q can be described as a half-hour Toho kaiju film. Although series creator Eiji Tsuburaya intended this series to be more like The Twilight Zone and focus less on the monsters, TBS convinced Eiji to add more monsters onto the show, as Godzilla and Gamera were very popular at the time.[1] This series predates The X-Files with continuing characters who investigate strange supernatural phenomena, including giant monsters, aliens, ghosts, and other assorted calamities. Perhaps the closest parallel in American TV is The Outer Limits, which in its original form generally featured a monster each week.

The original planned title of this project was UNBALANCE, and was subsequently renamed Ultra Q (inspired by "Oba-Q", the nickname of the title character of the then-popular anime series Obake no Q-Taro, and "Ultra C", a popular term used for women's gymnastics during the 1964 Summer Olympics, where a Russian gymnast created an extremely difficult maneuver called the "Ultra C"). The series was produced beforehand all through 1965 (it went in production as far back as 1964) and was broadcast at the beginning of the next year. At the time, this was the most expensive TV series in Japan.[1]

Because Eiji Tsuburaya had a high standing with Toho, he was able to use various suits and props from the various Toho Kaiju films for his series. The Manda prop was used for the dragon Kai Dragon as well as the head being used as the front portion of a Viking ship seen in episode 12, the giant octopus prop from King Kong vs. Godzilla was used to portray Sudar, while the Maguma suit from Gorath was used to portray Todora. As well, various other suits and props were refurbished to play some of the monsters such as Godzilla for Gomess, King Kong for Goroh, Baragon for Pagos, and a small Rodan prop for the birds Larugeus and Litra.

In 1967, Ultra Q was licensed from Tsuburaya Productions and TBS by CBS Films, producers of The Twilight Zone. It was a package deal that not only included Ultra Q, but also Ultraman. For the task of dubbing, CBS hired Film House in Toronto, Canada, what is now DeLuxe Toronto. Tsuburaya provided translated scripts, plus English language opening and closing credits, and a custom, swirling title-card. The series itself was dubbed in its 28 episode entirety. At some point, CBS Films backed out of licencing the series, and it was picked up, along with Ultraman, by United Artists Television, producers of The Outer Limits. With dubbing of Ultra Q complete, United Artists hired Titra Studios to dub Ultraman. Ultraman was syndicated, however, Ultra Q was not, due to being in Black-and-white at a time when most television was switching to color. After Ultraman finished its run in syndication, audio and film masters, and other materials, of both series were stored in the MGM vaults. In the late 1990s and early 2000s, all materials reverted to, and were collected by Tsuburaya. [1] [2]

It is commonly believed that only one episode, specifically Episode 3, was dubbed as a pilot. This has proven not to be true as other episodes have been found either in audio prints, like Episode 3, or film or video prints. From here it can be concluded that this was not the only episode produced.

Ultra Q's success earned it a weekly radio drama, starring the voices of the human cast from the original Ultra Q with some of the old monsters, such as Kemur, Garamon, Gorgos, and Namegon. Other new monsters included:

In the years following the show's original run, a live action film called Ultra Q The Movie: Legend of the Stars was released in 1990. A radio program featuring the voices of the three original stars of the show (playing their classic characters) called The Ultra Q Club aired on Japanese radio from 2003-2004. Also in 2004, a new series called Ultra Q: Dark Fantasy was produced while another series called Neo Ultra Q began airing in early 2013.

The original concept of the show (when it was going to be called Unbalance) was ultimately used for a 13-episode horror anthology series entitled Horror Theater Unbalance that was produced by Tsuburaya Productions in 1973. 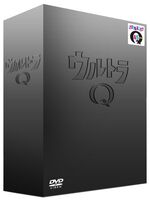