"After officer Hayata was given the life of the alien from the M78 nebula, he has transformed himself using the Beta Capsule. He flies at the speed of Mach 5. He is an immortal man who destroys all enemies with massive power. Go! Our hero!"

―The Narrator, introducing Ultraman, the hero from Nebula M78.

"Having been given the life of the spaceman from Nebula M78, Hayata now uses the Beta Capsule, and becomes that super-being - ULTRAMAN!!!"

―The Narrator, introducing Ultraman, the hero from Nebula M78.

Watch on Hulu
Ultra Operation No.1 (ウルトラ作戦第一号 Urutora Sakusen Daiichigō) is the first episode of Ultraman.

While patrolling the skies on the night shift, Shin Hayata reports back to home base he has seen a U.F.O. An enormous red orb is chasing a blue orb across the night sky. As fate would have it, Hayata's ship accidentally collides with the red object just as the blue U.F.O. descends into a nearby lake. Hayata is saved by the strange alien inhabiting the red glowing vessel. From the Nebula M78, the benevolent being explains it was pursuing the monstrous pilot of the blue ship, Bemular, after it escaped being escorted to the Monster Graveyard. Merging with Hayata and giving him the Beta Capsule, the SSSP (Science Special Search-Party) member secretly becomes Ultraman whenever monsters or aliens threaten the Earth.

"An inhabitant of Nebula M78?"

"That's right, I came from far away space. I was transporting Bemular to his grave in space, but he escaped and I have followed him to Earth."

"He is a space monster that can only bring forth chaos and destruction like a devil. I apologize for what I did to you, officer Hayata, for this reason I will give my life to you."

"Your life? What will happen to you then?"

"We will become one in body and soul, and fight for the peace of the Earth."

"Wait a second. You've been calling him "he", like a friend, but what's his name?"

"Don't joke, Everyone has a name."

"Then let's see-- How about Ultraman?"

"Right, Ultraman. What do you think?"

Ultraman: Here He Comes From the Sky (Chaiyo US release) 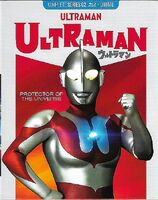