The equivalent of 22 in human years

A red star in the Felis Constellation (The Cat)

Yoshiko Kamei
Ultra Nyan (ウルトラニャン Urutora Nyan) is the hero form of an alien cat who was adopted into a family, appearing in animated shorts for the movies Ultraman Zearth 2: Superhuman Big Battle - Light and Shadow and Ultraman Tiga & Ultraman Dyna: Warriors of the Star of Light.

An alien red and white cat, Nyan came to share "happy energy" between Earth and his home planet of Felis. He was adopted by a human family and made friends with the local cats. He later saved his owner and other cats from a duo of crooks who were stealing cats to sell to pet shops.

Still living on Earth, his neighborhood came under assault from a gang of crows, one of whom he made friends with. In the end, to save his friends, particularly some kittens from the boss crow, he transformed and eventually calmed the crows.

Ultra Nyan transforms by the power from his Tail Ring. He jumps through the ring, then appears out on the other side in his "giant" form. 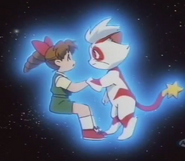 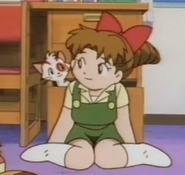 Haruka found Nyan inside a condemned building, injured after being hit by a car only moments after he landed on Earth. 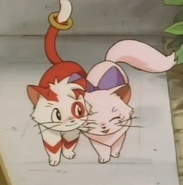 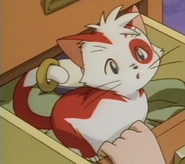 Cat in a drawer

The Felis Constellation The red star is Ultra Nyan's homeworld 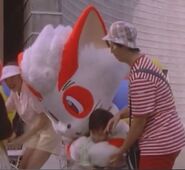 Released as part of the Wonder Capsule Ultraman Series lineup, this PVC figurine of Ultra Nyan is the secret figure of the line.