The Ultra Monster Series (ウルトラ怪獣シリーズ Urutora Kaiju Shirizu) is a series of sofubi soft vinyl action figures designed specifically for Kids created by Bandai that portrays the monsters found in the hit TV series: Ultra Q, Ultraman, Ultraseven, Return of Ultraman, Ultraman Ace, Ultraman Taro, Ultraman Leo, Ultraman 80, Ultraman Tiga, Ultraman Dyna, Ultraman Gaia, etc. The line of figures first started production in 1966, and since then, many other figures have joined the collection. The line's latest release was in 2011 December, although other figures had been scheduled to be released.

The first batch of the Ultra Monster Series had a decent look that had something competitors Bullmark, Marusan, and other companies could not offer: The accuracy of the figures to their costume counterparts. The other toys were not as accurate to the suit themselves as the new Bandai figures were, and because of this advantage, these figures became very popular and quickly became a force to be reckoned with for both Kids and Adults alike. The first set of these figures contained many memorable monsters from the original series. The later ones contained many other monsters. Later, there came SP's and EX's. Even later, Heisei monsters also joined the list, and the series became complete.

This year saw one of the largest releases for this series.

Similar to the Ultra Hero Collection Box/Everlasting Ultra Warriors, this 8-piece figure set was released in 2 box sets. Each figure stands about 10 cm tall (about 4 inches). 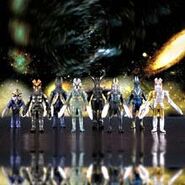 Throughout the ages, the Ultra Monster series went through many tag designs, from double sheeted to single sheeted, the tags remain a colorful part of the toys and are highly valued. This section talks about the unusual tags and Easter Eggs of UMS Tags.

The bagged tag monsters are some of the rarer tags, or rather, head-a-cards to find. The toys are no longer bound by a tag attached by a hook, but now a plastic bag with a piece of cardboard stapled to it. The version was also released in China by Bandai under the name "Fuman" with the ensign of "奥特曼" on it, marking the beginning of the official Ultraman name in China.

The promo tag was originally released in the 1966 Ultra Q Monster Series (as there were no other Ultras at the time, the UMS was just called the Ultraman Monster Series. Later, it would be Ultraseven, then Return of Ultraman, and Ultraman Ace.). The tags were only slightly different from the common tags and were used as an Easter Egg for buyers. Later, the tags were specifically attached to blanks figures made from white vinyl in the Ultraseven series, but the concept was ditched after the Return of Ultraman Series kicked in. The tags stopped production after the Ace series.

Typo tags were a strange series of tags in the 1989 run of UMS that had the manufacturer information printed right under the picture of the Ultras in white, successfully cutting the picture in half. The tags, however, featured something the common tags didn't: the name of the monster on the bottom of the back of the tag. A black-bordered version was also produced, but there has not been any trace of these tags since the 1989 run of UMS.

The Box of 49 tags were special tags created for a boxset of Ultras and Ultra monsters created by Bandai in the 1989 run of UMS. The box was rather clustered and featured tags with the box name on the picture of the Ultras, which was: Great Decisive Battle! Box of 49. The Ultras also had tags hooked to their back, instead of boxes.