During the release of the photobook of Ultra Strange Woman (ウルトラ怪女子 Urutora Kai Joshi), the book also comes along with a Drama CD provided by these characters

The casts are listed as below: 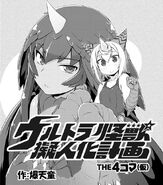