Turning into other weapons

In use
The Ultra Mantle (ウルトラマント Urutora Manto) is a magical cape that is owned by Ultraman King, but one was also given to Ultraman Leo. It acts as a multi-purpose weapon, capable of transforming into a cape, a dimensional mirror, as well as various other objects. The Mantle is able to stop incoming projectile attacks. When not in use it is stored as a gold band on Leo's left arm. Ultraman Geed also wears the Ultra Mantle when Riku uses the King Capsule to assume his Royal Megamaster form.

Being an item from Ultraman King the Ultra Mantle has many uses. When not in use, Leo will either store the cape as the gold band on his right arm, or he will wear it as a formal cape. 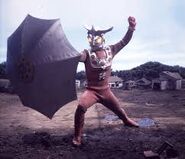