Still in use, held in the Ultra Tower
The Ultra Key (ウルトラキー Urutora Kī) is a sacred item that belongs to the Ultra Brothers in the Land of Light.

The Ultra Key is responsible for maintaining the Land of Light's orbit in Nebula M78. It resides in the Ultra Tower. Should it ever be removed, the Land of Light will fall out of orbit and will collide with the nearest planet that is on its collision course with. According to gameplay in Ultraman Fighting Evolution Rebirth, the Ultra Key itself also contains great power, being able to charge mass quantities of energy, enough to destroy an entire planet with a single blast.

In a story recounted by Dan Moroboshi, in the past, a rogue planet named Deemos was due to collide with the Land of Light. Father of Ultra fired the Ultra Key at Deemos, saving the Land of Light from imminent destruction.

Alien Babarue (as Imitation Astra) steals the Ultra Key from the Ultra Tower. Though the Ultra Brothers arrived to stop Babarue, aware of his identity, the alien fled to Earth in disguise.

Once the Ultra Brothers arrived on Earth in pursuit of Imitation Astra, they were confronted by Ultraman Leo, who had been tricked into believing that his "brother" was being attacked without reason. After a battle between the Leo Brothers and the Ultra Brothers, Ultraman King arrived and exposed Babarue for the fake he was, breaking the key in half so Babarue could no longer use it.

Though the Key was now unable to be used as a weapon, the Land of Light continued to descend towards Earth; Babarue wandered the streets of a vacant city and gloated as tidal forces between the two planets began tearing the ground apart.

After learning of the true whereabouts of his real brother from King, Leo went to rescue Astra, then the two Ultras returned to Earth to fix the broken key. With the key repaired, Astra made his way to the Land of Light to reinstate the key and end the impending collision, leaving Leo to fight Babarue in one final battle.

Once the Key was restored to its rightful place, the Land of Light returned itself back to M78.

In the events of the video game, Ultraman Fighting Evolution Rebirth, the Ultra Key has once again been stolen, this time by Chaosroid S. The Ultra Key is eventually returned to the Ultra Tower after Ultraseven defeats Chaosroid S in battle.

The Tamashii Webshop exclusive ULTRA-ACT Astra (2011) comes with the Ultra Key accessory for him to hold with.

Manufactured by CCP (Character Contents Production), this add-on accessory also comes with extra interchangeable arms and an Ultra Key for either the regular or the "High Spec" versions of the 1/6 Astra figurine.

Like the ULTRA-ACT figure, S.H.Figuarts Astra also comes with the Ultra Key.

The Ultra Key broken in two by Ultraman King 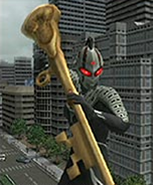 The Ultra Key in the possession of Chaosroid S
Bahasa Indonesia
Community content is available under CC-BY-SA unless otherwise noted.
Advertisement