Natural Feature on some Ultras

In Use
Ultra Horns (ウルトラホーン Urutora Hōn) are natural body features found on some Ultras.

The Ultra Horns are upward curved features that protrude out of the side of the heads of some Ultras. They are part of their natural anatomy. The Ultra Horns' primary purpose seem to be to manipulate large amounts of energy at once, possibly more than a normal Ultra without them. This includes energy transference, which was how Taro was able to achieve his Super Taro form, when the prior Ultra Brothers merged as one within him.

Taro's Ultra Horns is a genetic feature inherited from his father, that only appears in the male progeny of Father of Ultra's bloodline. Father of Ultra has stated that he was trained in the use of his horns by his own father.

Other examples of the Ultra Horns' ability to manipulate energy include Geed Magnificient, who uses them for his Mega Electric Horn. Taro has used his Ultra Horns to fire his Blue Laser during the battle with Tyrant.

Another use, as shown by Father of Ultra, is that the Ultra Horns can be used to acquire information from all over the Universe via a form, or evolution of Clairvoyance some Ultras have shown. So far Ken (Father of Ultra) is the only one to demonstrate this ability. 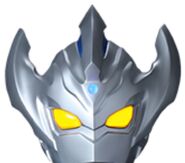