Wuleian is an Ultra Warrior that appears in the manga story "Zoffy's Legend".

Wuleian became the guardian of a young Zoffy after his parents died. He then took Zoffy under his wing and taught him the M87 Ray. During a fight with a group of aliens, Wuleian held the alien leader down and commanded Zoffy to fire his M87 Ray, resulting in Wuleian sacrificing himself. Zoffy was put into a coma by his actions, where he was later discovered by Father of Ultra, who eventually revealed the unfortunate death of Wuleian. 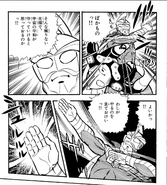 Add a photo to this gallery
Retrieved from "https://ultra.fandom.com/wiki/Ultra_Hero_Wuleian?oldid=428363"
Community content is available under CC-BY-SA unless otherwise noted.