The ship is extremely good at destroying an invader's UFO. Here is a list of alien UFO it has destroyed.

The whole fighter jet was actually destroyed in Ultraseven Episode 32 as it was kicked by the monster Rigger.

In Ultraman Mebius episode 24, it was presented along with some older jets in display. 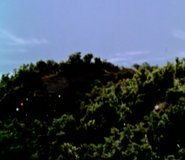 Ultra Hawk No.1 as seen in Heisei Ultraseven. 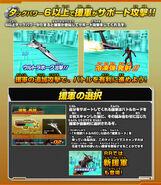 Ultra Hawk vs Dark Zagi in Mega Monster Battle: RR
Add a photo to this gallery

Retrieved from "https://ultra.fandom.com/wiki/Ultra_Hawk_No.1?oldid=409022"
Community content is available under CC-BY-SA unless otherwise noted.