On July 25, 2017, Toku announced that the series (along with its second season) will air in the United States on its channel with English subtitles beginning August 31, 2017. [1][2]

50 years after the extinction of monsters, humanity had finally advanced to outer space.

The crews of Space Pendragon were tasked to investigate Planet Boris after communications on that planet were mysteriously halted. Arriving on the planet, the crew was astonished to find it inhabited by monsters, with every nearby city destroyed. While forced to wait for reinforcements, the crew must solve the mystery of this planet's background as a monster tamer named Rei, whose past remained mysterious, joined ZAP SPACY in order to learn his past. 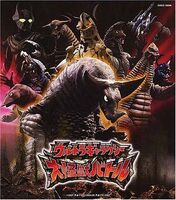 Retrieved from "https://ultra.fandom.com/wiki/Ultra_Galaxy_Mega_Monster_Battle?oldid=534680"
Community content is available under CC-BY-SA unless otherwise noted.