"An invitation to witness history"

Ultra Galaxy Fight: The Absolute Conspiracy (ウルトラギャラクシーファイト 大いなる陰謀 Urutora Gyarakushī Faito Ōinaru Inbō) is an Ultra Fight spin-off miniseries. It was broadcast exclusively on YouTube in both Japanese and English languages.[1][2] The series serves as the start of an ongoing arc involving The Absolutian race and an aggressive faction within it, 'The Kingdom', along with the foundation of the Ultra League to combat them.

Chapter 1 takes place some time after Ultraman Saga, as Cosmos had mentioned the "Future Earth World" where he once helped Zero. However, the events happen before Ultraman Orb THE ORIGIN SAGA, as the Tree of Life was still on Planet Kanon instead of Planet Earth.

Each episode of Chapter 2 takes place during different points in the timeline:

A mysterious golden giant appears... Who is the so-called "Absolute Tartarus" and how will he interact with our Ultra Heroes!?

Mysterious aliens and evil monsters that shouldn't exist are attacking!

Zero, Ribut, Taiga, Z, 80, Max, Mebius, Great, Powered, Grigio, and many more Ultra Heroes fight together to solve this mysterious case, which could end up affecting the whole universe. However, this is only the beginning! A conspiracy is underway – and stories are intersecting. What is the aim of the golden giant working in the shadows?!

While connecting to the TV series Ultraman Z as well, the new history of Ultraman begins![1][2]

This is the story of Galaxy Rescue Force's elite Ultraman Ribut's days as a Civilization Guardian. Together with Ultraman Max, Ribut senses a strange presence on a certain planet... However, it's a trap set by an enemy seeking revenge. Max defends Ribut, putting himself in danger! At the same time, Ultraman 80 and Yullian are attacked by Leugocyte.

This is just the beginning of the "Absolute Conspiracy!" Who is Absolute Tartarus, the mysterious golden giant working behind the scenes? Will Ribut be able to save Max and put an end to this enemy's threat?[3][4]

A long time ago, in the era of the Ultimate Wars that occurred tens of thousands of years ago… While a ferocious battle was unfolding between Alien Empera's monster army and the Land of Light, Ultraman Ken (later the Father of Ultra) and Ultraman Belial gave battle without yielding. While they were heroes who fought together, Belial was unable to accept the distance growing between them as Ken was appointed captain of the Inter Galactic Defense Force and won the heart of Ultrawoman Marie (later the Mother of Ultra). He began to seek even more power, behaving more and more recklessly...

At that moment, the golden giant Absolute Tartarus appeared and whispered, "Don't you want to change your fate?"

Years passed, and in the Land of Light there was a scientist named Ultraman Tregear. Filled with regret that he was unable to join the Inter Galactic Defense Force and complicated feelings for his close friend Ultraman Taro, the “Emissary of Light,” Tregear devoted himself to doing research with Ultraman Hikari, the respected director of the Science Technology Bureau. However, one day, Hikari vanished, and his fate began to change…[3][4]

Ultraman Zero and the others come forward with new countermeasures to oppose Absolute Tartarus, the golden giant pulling the strings behind the scenes. The newest member of the Inter Galactic Defense Force, Ultraman Z, joins his reliable senior Ultraman Mebius to face down this absolute conspiracy...![3][4] 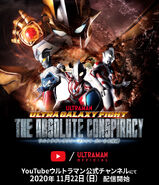 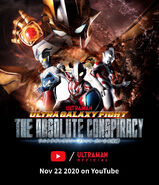