In use
Ultra Fusion Brace (ウルトラフュージョンブレス Urutora Fyūjon Buresu) is a transformation brace used by Hikaru Raido in Ultraman Ginga S The Movie: Showdown! The 10 Ultra Warriors!. This bracelet is a successor to the Strium Brace, which at that time was Ultraman Taro's alternate form and allows the combination of Ultraman Ginga and Victory into Ultraman Ginga Victory.

Soon after Hikaru and Sho passed the trial, the Ultra Fusion Brace revealed its true form. Right after Musashi succeeded in rescuing the sealed Ultramen, the Heisei Ultramen gave their powers to the brace. Ultraman Ginga S The Movie: Showdown! The 10 Ultra Warriors!

Ultra Fusion Brace was used again to finish off Gua Spectre by unleashing Tiga to Gaia's finisher alongside Exceed X. The Shining Sky, and the Land Beneath It

The Ultra Fusion Brace allows Ultraman Ginga Victory to use any of the powers/techniques of the previous Heisei Ultras, Tiga-Zero. However, out of all the spins in one roulette, Tiga, Dyna and Gaia shared the same section, this could be due to either limited number of sections or how these three are always portrayed in most films under one team-up. In Tiga, Dyna and Gaia's case, when Hikaru uses this section, Ginga Victory will automatically use all these three Ultras' power. 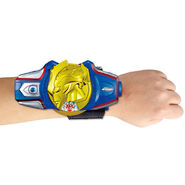 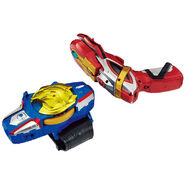 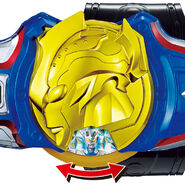 Ultraman Zero selected in the roulette.