"Lend me the power of father and son!"

Ultra Fight Orb (ウルトラファイトオーブ Urutora Faito Ōbu) is a Tokusatsu Ultraman Series that succeeds Ultra Zero Fight and Ultra Fight Victory. It is also the second spin-off of Ultraman Orb after Ultraman Orb THE ORIGIN SAGA taking place after Ultraman Orb The Movie: Let Me Borrow the Power of Bonds! and airs during the timeslot of Ultraman Zero: The Chronicle. The series has its own promotional catchphrase being "Lend me the power of father and son!" (親子の力、おかりします！ Oyako no chikara, okarishimasu!), a reference to the new Emerium Slugger Fusion Up form. It is Chapter 9 of the Ultraman Orb Chronicle.

A ghost mage that can manipulate the soul of any monster appears, with the intent of ruling the universe. With a new enemy that can manipulate a monster's soul, Ultraman Orb and Ultraman Zero emerge to stand in his way. Orb will fight a ghostly villain with ghost monster army corps through various fusion ups including Lightning Attacker with the power of Ginga and X! Orb will fulfill new fusion ups while the mighty warriors of the lights appear to assist Ultraman Orb. Even with Ultraman Orb's new forms, will he be able to overcome the threat of Reibatos?

Mill Creek Entertainment is set to release Ultra Fight Orb as a bonus special in the release of Ultraman Orb THE ORIGIN SAGA. 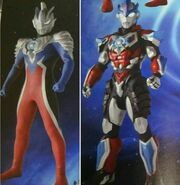 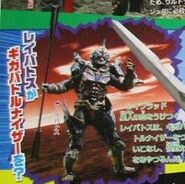 Ultraman Geed's Cameo in the magazines