The Ultra Eye (ウルトラアイ Urutora Ai) is Dan Moroboshi's transformation item. With it, he can transform into his true self, Ultraseven. His famous quote before he transformed is "DYUWAH". When bonded to human hosts Masaki Kazamori or Jin, it allows them to control Seven's actions.

The original Ultra Eye was simple. Upon use there was a transformation scene where the glasses would disappear and change Dan into his Ultra form from head to toe. Often times Seven would be human size and would take on giant size afterwards. Later on, during the time of Ultraman Leo's stay on Earth, Seven was gravely injured. As a result, the Ultra Eye was damaged, leaving him stranded in human form, even though he has transformed without its usage.

Eventually Ultraman Jack took it back to the Land of Light for repairs and, sometime after the destruction of MAC headquarters, Seven soon regained his true form.

Technically, Ultraseven X's Ultra Eye was the same as the original. But like Ultraseven himself, the Ultra Eye also received an update, looking more sleek and streamlined. Upon use, the Ultra Eye turned into a light that covered Jin and morphed him into Ultra form, with a bright flash, but in real time forgoing the use of a transformation scene for the whole series.

Ultra Eye popping out for the first time

Alien Magellan (Maya) about to return the Ultra Eye to Dan

Dan and Masaki Kazamori from the Heisei series 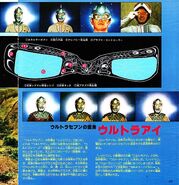