While designing Dark-Killer, Masayuki Gotoh imagined him as a version of Ultraman Taro who fell to the dark side, with elements of several Ultras added on.[1]

Ultra Dark-Killer is a conglomerate of past monsters defeated by the Ultra Brothers. He fought the core six members in the past and was defeated by the Super Ultra Dynamite attack initiated by Ultraman Taro through energies donated by the other Ultras.[2]

In the present day, Dark-Killer was revived and established the League of Darkness by bringing along Dark Lugiel and Etelgar from their deaths in order to start a multiversal conquest against all existing Ultras. He targeted X and Geed to create their copies before sending them into ambushing Orb for similar purpose. Under Ultraman Tregear's suggestion, he kidnapped Grigio (and Zero simultaneously) into the Dark-Killer Zone to prevent Ultraman Gruebe's formation.

With Grigio and Zero in their captivity, Dark-Killer used them as leverage to lure the New Generation Heroes to Planet Tenebris, wanting to create more Darkness Ultras as part of the League of Darkness' combatants. The rescue party was narrowed down to Ultraman Rosso and Blu when the rest were preoccupied with their opponents. Dark-Killer ambushed the brothers and using the Dark-Killer Zone's light-draining property to his advantage. After leaving the Ultraman Zero Darkness in against Zero and Grigio, he prepared to absorb the brothers' lights, but Grigio mustered her remaining strength to repel the villain and recharge her brothers into forming Ultraman Ruebe. The Super Ultra made a short work against Zero Darkness and finally killing Dark-Killer, but Tregear revived the pair in his last act to spite the New Generation Heroes.

Dark-Killer was said to have been born from the grudge of various monsters and aliens destroyed by the Ultra Brothers, much like Grand King and Tyrant. However, unlike those two monsters, Dark-Killer was capable of reasoning and conversation.

He harassed Taro by reviving several monsters to weaken him before covering the Earth with the Killer Plasma effect. Although he initially overpowered Taro in their duel, he was defeated when the Ultra Brothers, from Zoffy to Ace, appeared and merged with Taro to grant him his Super Taro form. Defeated by an Ultra Dynamite, Killer's eyes turned blue as he encounter a new emotion, brought on by Taro's self-sacrifice.

Ultraman Taro: Revenge of the Dark

Despite his defeat, Dark-Killer later returned, driven and revived by his hatred for Taro. At this time he learned to use the Killer Plasma attack to separate his body and create the Ultra Dark Killer Brothers, dark doppelgängers of the Ultra Brothers that assisted Taro in their last fight. He then attacked Ultraman Mebius and the real Ultra Brothers, but was driven off.

A few thousand years later, Dark-Killer was revived with new powers. He awaited Zero in a different dimensional subspace and fought in the same manner with his duel against Taro. In the middle of the battle, Dark-Killer splits between two different forms, Shadow and Might to fight the young Ultra with both brute strength and super speed. In the final fight, the clones merged into Delta and was defeated by Final Ultimate Zero. 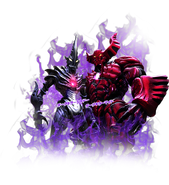